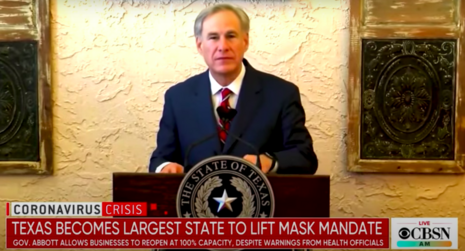 On March 2, coincidentally Texas Independence Day, Governor Greg Abbott (R-TX) announced that Texas is open 100 percent and the statewide mask mandate is over! Well, his joy was also over in about .2 seconds after Twitter celebrities, most of whom don’t even live in Texas, came after him feeling personally offended.

Abbott felt that Texas made enough progress and was on the right track regarding COVID. He was comfortable removing the state mask mandate and joining the 15 other states without them.

Per usual in regard to conservative views, or a conservative leaning individual in general, Hollywood crazies opened their traps.

Honestly impressive to live in the same state as Ted Cruz and still be the worst politician https://t.co/kAaxbknWi8

Only another white man could figure out a way to become a worse person than Ted Cruz. https://t.co/sdtKWhe0hy

Celebrities and other Twitter blue checks mentioned how Abbott’s decision is “knowingly putting people’s lives in danger” and is supposedly “mass murder.” Some users even said his decision was “premature” and he was an “idiot.” Others said Texas just wants to "kill everybody" and "has decided to join the side of the virus."

To come to Abbott’s defense, gun-rights activist Rep. Lauren Boebert (R-CO) tweeted at him, “God Bless Texas!” And again, since a Republican opened her mouth, all hell broke loose. 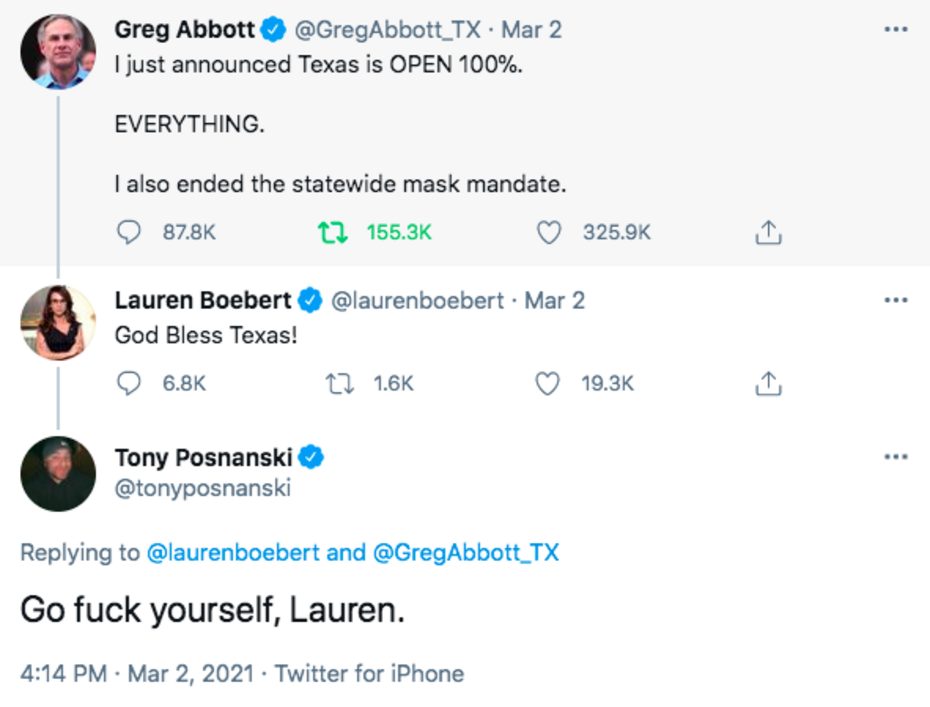 In Abbott’s Executive Order remarks he mentioned the progress Texas has made. Nearly 5.7 million vaccines have been given to Texans and by next week, the expectation is 7 million. To add, the number of COVID-19 cases in Texas is the lowest since November and the recovery rates have increased.

But, the decision he based on rather promising statistics postured him in a negative light in the eyes of Tinseltown. Abbott wasn’t being careless or looking for ways to execute a “mass murder.” As he said on Twitter, the mask lift is to allow Texas the “freedom to determine their own destiny.” Abbott also tweeted a reminder about the “100% open” status: “Today's announcement doesn’t abandon safe practices that Texans have mastered over the past year. Instead, it’s a reminder that each person has a role to play in their own personal safety & the safety of others.”

But, the Twitter mob thrives best when getting involved in everyone else's business! Remember a year ago when we had “14 days to flatten the curve”? What a time that was.