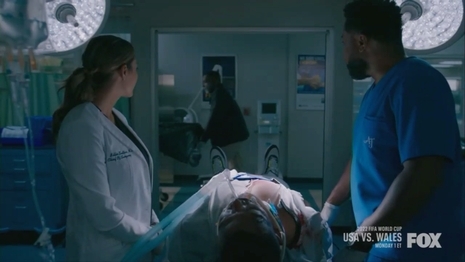 CBS’s East New York and Fox’s The Resident both took on the fentanyl crisis plaguing communities across America in their most recent episodes, yet both shows failed to mention the root causes, such as the border crisis and China.

Kudos to the writers for at least tackling this important issue, as fentanyl overdoses have been reported on as the leading cause of death for young adults ages 18-45.

The numbers are staggering, with fentanyl deaths accounting for more in this age range than anything else such as Covid-19, suicides, cancer and motor vehicle accidents, among other things.

Season 1, episode 8 of East New York centers around the deaths of four young partygoers due to fentanyl overdoses.

Detectives attempt to track down the source of the drugs, which leads them to a warehouse where they eventually seize a large amount of fentanyl:

Detective Tommy Killian: Fifty dollars a head to get in, no alcohol, no food. Bring your own drugs?

Club Bouncer: People do what they do. I just don't get involved.

Deputy Inspector Regina Haywood: I got called in by Operations on my way in. What are we looking at?

Officer Brandy Quinlan: Whoa, excuse me, sir. You're gonna have to step back.

Victim's Boyfriend: I got a call that my girlfriend died. I just want to see her.

Quinlan: I'm sorry, but you can't do that right now.

Victim's Boyfriend: I can't see her?

Quinlan: I'm sorry, not at this time.

Detective Crystal Morales: Who do you think passed the bad dope?

Haywood: What about other people?

Sean: I don't know about other people.

Haywood: What was the vibe? Were they doing cocaine, heroin, ecstasy, what?

According to the storyline, the main supplier of the drugs is a Mexican drug cartel, but no mention of how the drugs made it into the U.S. in the first place.

Also, no mention of how the Mexican drug cartels are taking advantage of the Biden administration’s lax border policies or how China is a main source of fentanyl-related substances.

In episode 8, Season 6 of The Resident, the plot revolves around a bad batch of fentanyl-laced pills taken by a group of students.

A young boy named Malik, who they suspect is suffering from an overdose, is brought to the hospital. They find out from his girlfriend that other students had taken pills from the same batch, which led one of the doctors on a life saving mission to save the other students before it’s too late:

Dr. AJ Austin: By the time Conrad got to him, he was already gone.

Austin: Kids are supposed to learn from their mistakes, not die from them. And this one here is gonna need both of our expertise. It's a damn shame.

Sutton: Meet you in ct.

Dr. Conrad Hawkins: We got a pulse.

Nurse Ellen Hundley: His brain has been without oxygen for a long time.

Hawkins: Yeah, we've given him a shot. Not time to celebrate just yet.

Dr. Kincaid Sullivan: We'll get him to the ICU and send him through the scanner on the way.

Dr. Ian Sullivan: Hey, I heard you had a bunch of overdosed kids in the ER. I came down, I wanted to see if I could help.

Dr. Kincaid Sullivan: Uh, yeah, multiple cases of fentanyl poisoning. This kid had a PEA arrest on the way in, we got him back, but it's not clear what's left.

Dr. Ian Sullivan: So, nothing surgical?

Dr. Kincaid Sullivan: Dr. Austin and Dr. Sutton have a head trauma that'll probably end up in the OR.

Dr. Ian Sullivan: This one of the fentanyl overdoses? So young.

Hawkins: Yeah. 13. Two of the older ones are in real trouble. Another one was dead at the scene.

Dr. Ian Sullivan: Did you find the rest of the pills?

Hawkins: Yep, his older brother had them in his pocket.

Sadly, the fentanyl crisis doesn’t get the attention it deserves, considering the amount of death and destruction taking place in the U.S. because of the synthetic opioid.

And it’s not just TV shows avoiding the topic of root causes, it's also the mainstream media.

In eight and a half months of fentanyl stories, ABC, CBS and NBC allowed just two mentions — totaling 30 seconds —  of the man in charge of the immigration policy leading to this drug crisis.

MRC analysts reviewed every one of these stories on the broadcast network morning and evening newscasts from January 1, 2022 through September 15, 2022. They found 39 minutes and 56 seconds of coverage on the epidemic, but just 30 seconds devoted to Biden or his role in any way.