One reason why right-wingers don’t like the wokes is because they make simple things extremely confusing. For instance, take gender. One is either male or female. But the wokes, with their infernal LGBTQ agenda, wanted to shake that simple formula up. Now the world has transgenderism, with transgender people being born as males, but later decide that they should actually be females, and vice versa. The premise is confusing (particularly for the sense of sight), but that’s nothing compared to a person called Gottmik. Prepare to be mind-boggled. 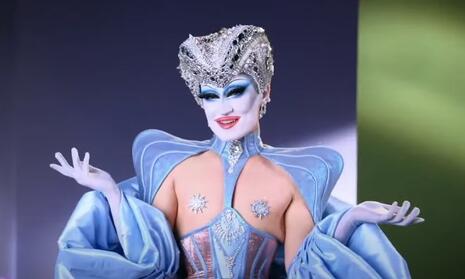 According to thewrap.com, makeup artist Gottmik (pictured) became the first ever transgender male drag queen on the show RuPaul’s Drag Race. Gottmik stated that “he” is “a trans man who is changing the face of drag.”

That’s not the only thing he changed. To make it entirely clear, since Gottmik is a trans man, “he” was born a woman, but now he's a man dressing up as a woman in drag.

If you find this hard to understand, don’t reproach yourself.

As MRC Culture's On TV blog editor Alexa Moutevelis lamented, “A woman who changed her body to look more like a man who now dresses and puts make up on to look more like a woman - what is the world coming to?” Exactly. If Gottmik wants to dress up as a woman, why did he (she?) need to change his gender at all?

The series promoted Gottmik with the words, “This celebrity makeup artist is ready to win the competition one face at a time (and) ready to show an edgy persona d’arte.”

It’s guaranteed that Gottmik will win the hearts of all left-wingers while obliterating the minds of all right-wingers.

Trans women have been cast members on previous seasons of RuPaul’s Drag Race, so Gottmik is not the first transgender person to appear on the show, though as previously stated he was the first trans man to be featured. RuPaul himself has said, “the trans community are heroes of our shared LGBTQ movement. You are my teachers.”

Yeah, they’re teaching that gender is as changeable as profile pictures on Twitter. How is deciding to change your gender heroic? Heroes usually have to selflessly face terrible dangers to complete their noble objective. What ferocious obstacles are there to overcome in deciding to change one’s gender, aside from common sense? RuPaul is just being excessively dramatic and sentimental.

The wokes don’t get that living simply is best, and there’s nothing simple about changing genders.