How inhuman have abortion’s most rabid defenders become? This afternoon, abortion apologist Amanda Marcotte, a radical feminist writer for RawStory, made the ultimate in frivolous analogies. She tweeted: “Hating PPFA is, in this sense, no different that getting mad that someone uses food stamps to buy strawberries.”

What did the Marcotte mean by “in this sense?” She must have been referring to what she sees as an attack on low-income women who rely on Planned Parenthood for healthcare. Defunding Planned Parenthood would be equivalent to dictating what women could buy with taxpayer money … I guess? Who knows.

Thankfully, the twitter-verse did not respond well. 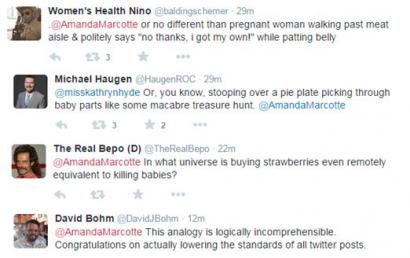 Whatever Marcotte’s poor analogy really meant, it certainly trivialized the plight of unborn babies left (literally) in the hands of Planned Parenthood workers.

Of course, Marcotte is no stranger to angry and illogical tweets. She has spent considerable time denouncing the “anti-contraception, misogynist radicalism behind the Planned Parenthood attack videos.” Like a perfect progressive, she has diverted the issue from an attack on abortion brutality to an attack on women and contraception.

Her strawberries tweet was simply the latest in this long string of denials.