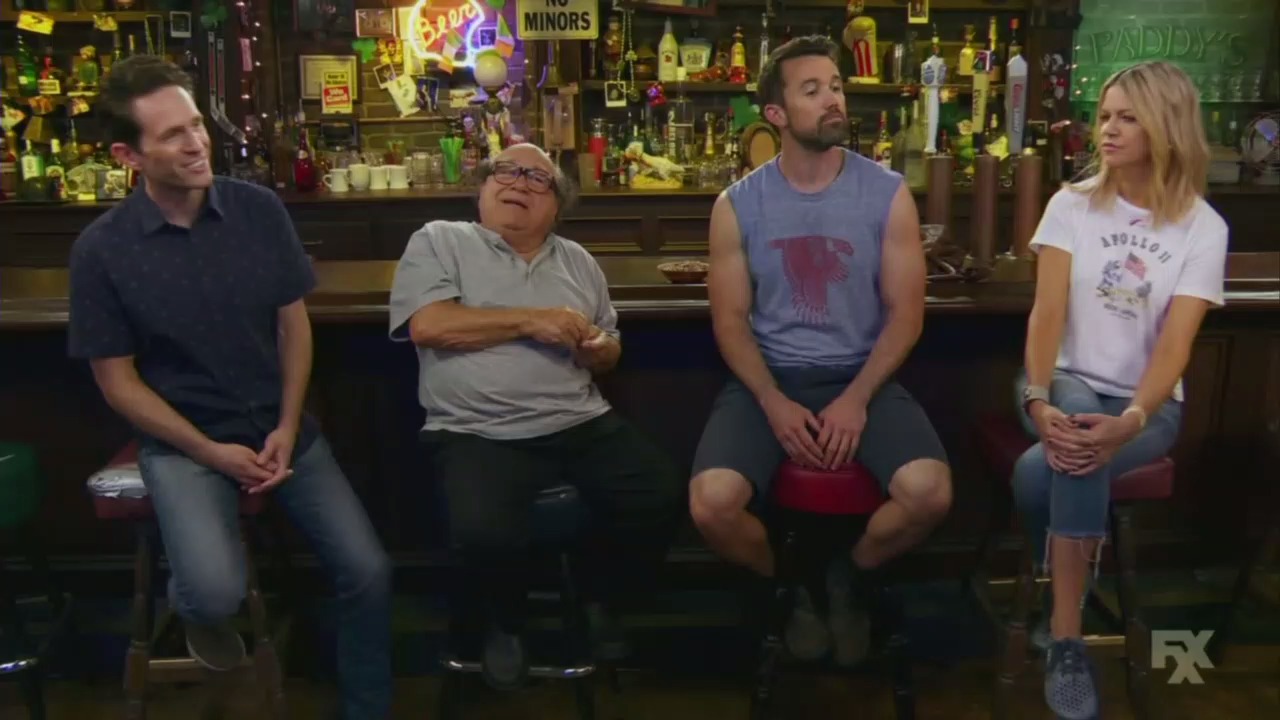 Wednesday's episode of FXX's It's Always Sunny in Philadelphia, "The Gang Solves Global Warming" focused on --- you guessed it --- global warming, but also exhibits anti-Christian sentiments.

The episode began at Paddy's Bar where the main characters were discussing climate change and how to get it to work to their advantage by lowering their air conditioning to bring more clients in during the heat wave and also find a way to aid the environment at the same time.

Dee (Kaitlin Olson) stated that the best way to get results is to shame people into making changes in their lives the way she does on her Instagram stories, using her eco-friendly shoes to make people feel stupid for not having them:

Dennis: …we're actually helping our business and helping the environment.

Dee: No, that doesn't work. Shame's better. Like I do with my shoes, you know what I mean?

Mac: How would I know what you mean?

Dee: My shoes that are made out of recyclable materials. I did a whole Instagram Story about it. Talking about how great the shoes are, making people feel stupid for not having them. You know, you remember.

Mac: Who the fuck do you think is watching your—What? Not-not one person on Earth is... Get out of here!

Dennis: What are you talking about? Plus, how is there any plastic left in the ocean after they used it to cover your gargantuan feet?

Charlie: Hey, guys, though, we got a little bit of a problem. Uh, there's, like, a, I don't know, like, a backup of the water lines or something. The ice machine's broken. We don't have any ice.

Dennis: Oh, shit. Okay, well, just, uh, call the store and have them deliver some ice.

Dee: And make more waste by having a big smoke-spewing truck deliver ice to us when we could just simply get off our asses and go get it ourselves? Hey, guys, listen, I just wanted to talk about the importance of not only talking the talk, but also walking the walk. Oh. As I'm saying that, it's reminding me I'm loving my new eco-friendly shoes. See there? Not only am I helping the environment, I could also get some free swag, if I keep it up, play my cards right.

Dennis: That's awesome. You're such an awesome eco-warrior. And since you want to walk the walk, why don't you walk to the store and pick us up some ice?

While Dee went to get ice, utilizing her eco-friendly shoes that she had been bragging about on social media, the guys focused on how to get the air conditioning to stay low with all the body heat in the bar and ended up getting into a disagreement about faith, as Mac was religious but Dennis was not.

Mac believed that the heat wave and everything that had happened was all in God's plan and Dennis outwardly mocked him, calling him irrational, and stating that "there's no way to have a rational conversation with you" because Christians don't use reason. It's funny, because I'm pretty sure he wouldn't speak like that to a Buddhist or a Muslim, but since Mac is Christian it's totally okay. Double standard, anyone?

The rest of the episode continued in much the same way, with the gang focusing on climate change and how to help put an end to it but without actually doing anything productive, which just seems to be par for the course with the liberal mindset.