The series premiere of Paramount’s 68 Whiskey on January 15, “Buckley’s Goat,” introduces viewers to the boozed up, foul-mouthed (they drop uncensored f-bombs 25 times in 60 minutes), overly sexed (the very first scene involves soldiers getting it on) Army medics stationed in Afghanistan.

There’s politics too, though, as just as she’s about to be reprimanded for a drunken rampage, Rosa Alvarez (Cristina Rodlo) is informed her DACA status is being revoked.

Captain Hazara: Sergeant Roback and Sergeant Davis asked me to intervene with Colonel Austin on your behalf.

Captain Hazara: Yeah. Look, whatever happens, know that I'm British Pakistani, so I know a thing or two about being unwelcome in your own country.

Rosa Alvarez: What do you mean?

Harlan Austin: Alvarez, get in here.

Harlan Austin: You hear the word "Sit"? You heard it now. Captain Hazara gave me a sit-rep. Losing someone in the field is the most traumatic eventuality we face. Unless of course you're the unfortunate son of a bitch who's been killed. But then you'd be dead and probably wouldn't give a shit. Anyway. That display you put on yesterday cannot be ignored. Sounded disgraceful. Sorry I missed it. Ooh, I was prepared to come down hard on you, Alvarez. But here's the thing. There's been a change in your status here.

Harlan Austin: I was just informed that you've been abruptly discharged, so I can't take action against you, because you're no longer under my command. 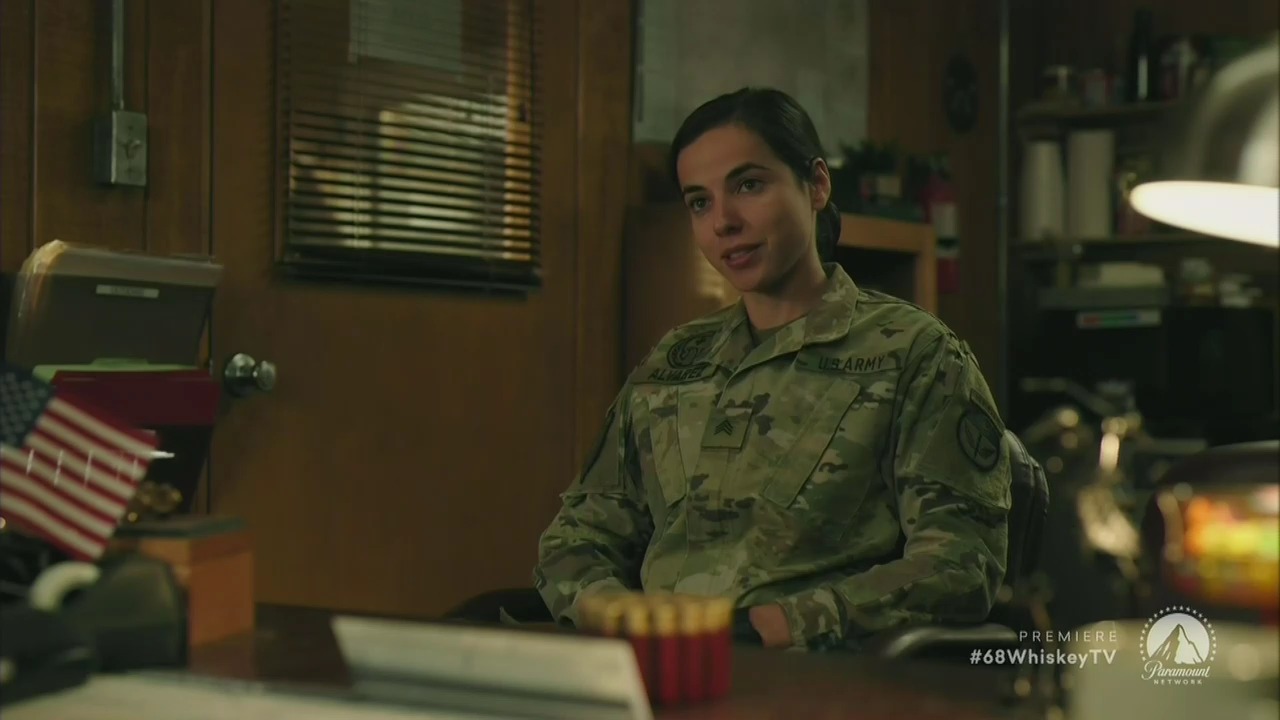 Rosa Alvarez: Yes, sir. - Then this must be related to your mavni status. Sounds like it's being revoked. This isn't a surprise to you, is it?

Harlan Austin: No, sir. My father was recently deported while washing dishes in the worst Chinese restaurant in El Paso because someone didn't like their moo goo gai pan.

Harlan Austin: That was quite evocative.

Rosa Alvarez: But that should have no bearing on me, sir. I was granted permission to enlist under mavni because of my medical skills. And also promised citizenship.

Series creator Robert Benabib told USA Today that he “didn’t feel the need to get macro and political because their individual stories really kind of told you where we were at this point in our history.” Bringing up DACA and deportations seems pretty political to me. Scenes for future episodes show it is likely only going to become more so.

Rodlo’s comments for USA Today suggest a purpose for politics, too. "She’s fighting in between staying in this army, (which) doesn’t actually take her as a citizen, or going home with her family and try to find a new home, whatever that is, because her home is the United States of America," she said. "It’s great that we show this. … To me, it’s very important because I’m Mexican, and I think we come to this country to make a change and to make this country better."

Sex, booze, and foul language aren’t enough. They’ve got to bring the politics of illegal immigration into it.