If it’s Thursday night, it’s CBS’s The Big Bang Theory, which has come to mean another Chuck Lorre vanity card during the last few seconds of the credits. Many of them have had to do with President Trump, though Lorre once again purposefully did not mention Trump by name.

The text of the latest vanity card reads as if it were a scene from a screenplay: 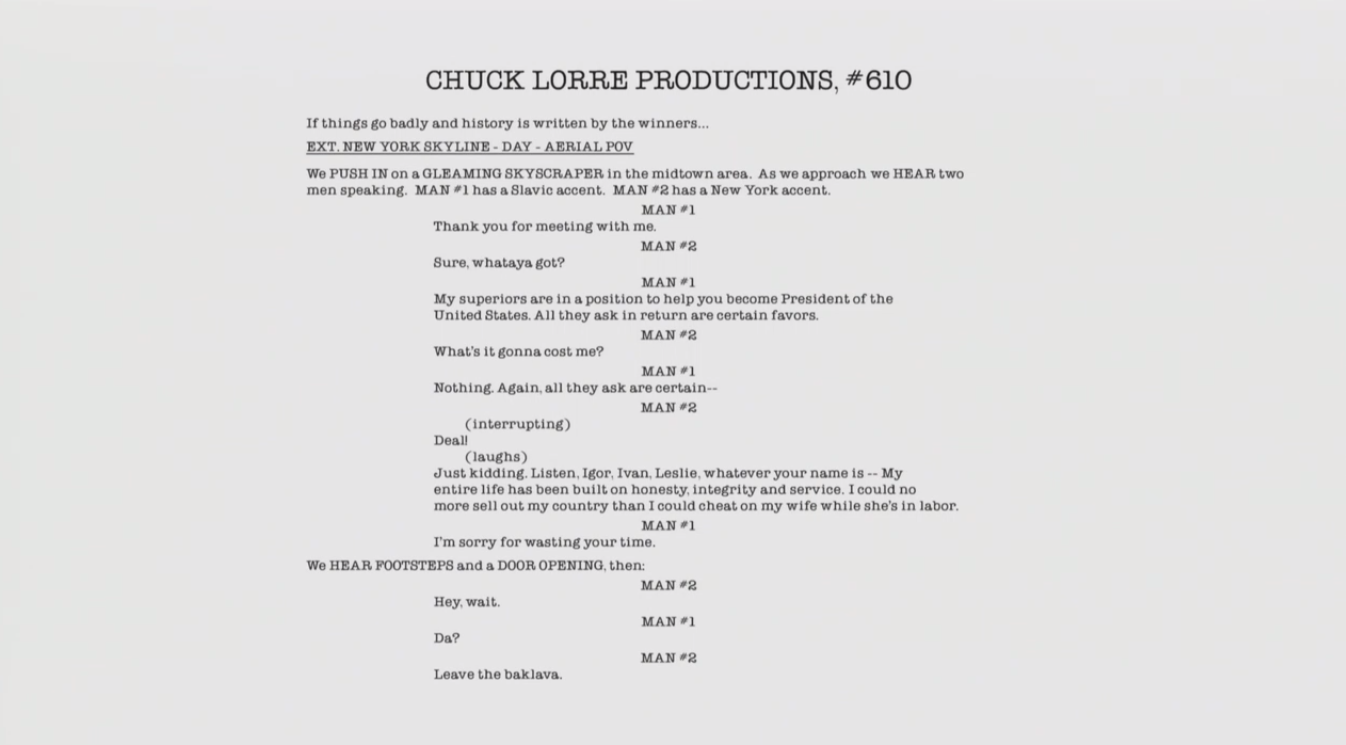 If things go badly and history is written by the winners...

We PUSH IN on a GLEAMING SKYSCRAPER in the midtown area. As we approach we HEAR two men speaking. Man #1 has a Slavic accent. Man #2 has a New York accent.

Thank you for meeting with me.

My superiors are in a position to help you become President of the United States. All they ask in return are certain favors.

What's it gonna cost me?

Nothing. Again, all they ask are certain--

Just kidding. Listen, Igor, Ivan, Leslie, whatever your name is -- My entire life has been built on honesty, integrity and service. I could no more sell out my country than I could cheat on my wife while she's in labor.

I'm sorry for wasting your time.

We HEAR FOOTSTEPS and a DOOR OPENING, then:

Like the other BBT episodes featuring political vanity cards, “The Confirmation Polarization,” which aired January 17, didn’t even delve into politics. Faced with being nominated for the Nobel Prize in Physics, alongside two other physicists, Sheldon (Jim Parsons) decided to turn it down because his wife, Amy (Mayim Bialik), who also worked on the theory, would be left out. It was a sweet episode, actually, which touched many viewers. Yet its last few seconds had to be ruined by politics, namely Trump and the Russians, which already is in the news, day in and day out. One of the latest allegations is that Trump may have been working on behalf of Russia, a hostile foreign power. I can barely keep up.

Can’t a tender moment between a young married couple, especially so iconic as Sheldon and Amy, be enough? Apparently not.

Lorre goes for the creative touch, setting up the scene of a movie starring, of course, a shady Russian and a character who is obviously Trump. Even with no other identifying factors, we would get that it’s Trump because of Lorre’s previous preoccupation with this president. Even going for something different this time with a screenplay, it’s a lame formula many in the liberal, mainstream media are already using. Though I suppose I should thank Lorre for setting it up so perfectly to use the pun that we’ve seen this script before.

What Lorre and other liberals cannot begin to fathom is that it’s not about the Russians, Vladimir Putin, or “sell[ing] out my country.” Perhaps Trump was elected to the presidency fair and square. Nope, the Orange man with the New York accent is too bad. It’s got to be the Russians.