As television shows begin to return back to their regularly scheduled programming following their winter break, so has Chuck Lorre resumed his political rants when it comes to shows he’s created and produces. This is even when the show’s episode has nothing to do with politics.

Viewers of the January 3 episode of The Big Bang Theory, ‘The Paintball Scattering,’ watched the characters engage in, you guessed it, playing paintball. Those who stuck around until the very end, however, were treated to a political vanity card from Lorre. 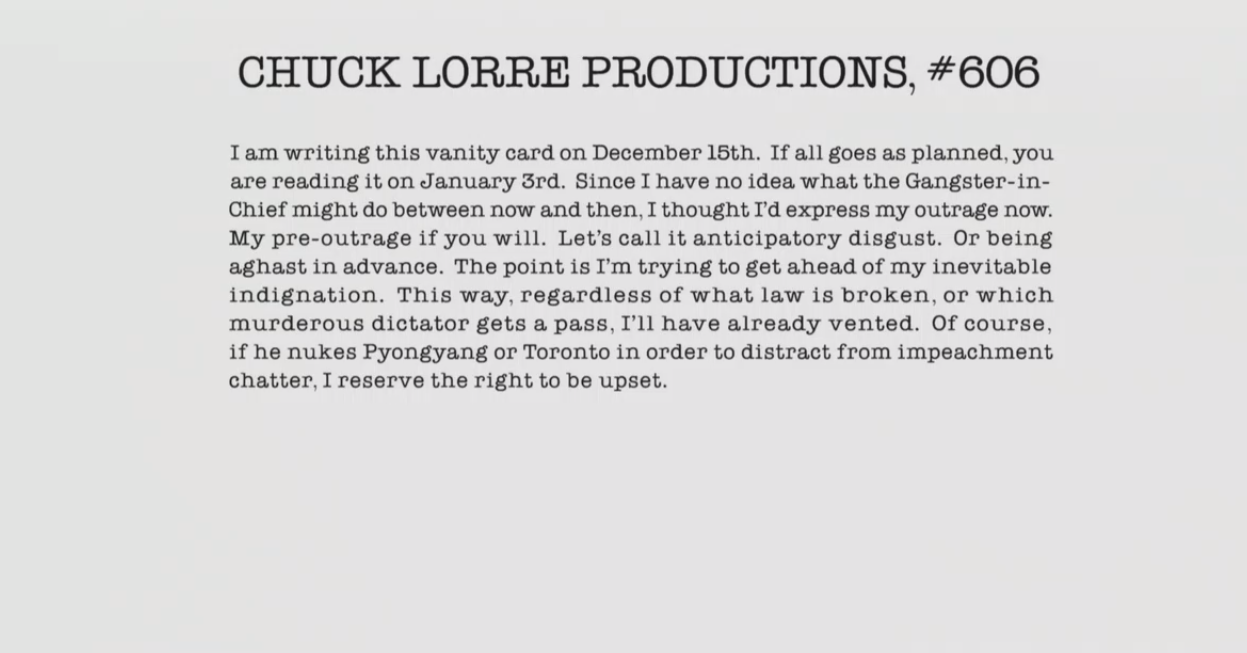 I am writing this vanity card on December 15th. If all goes as planned, you are reading it on January 3rd. Since I have no idea what the Gangster-in-Chief might do between now and then, I thought I’d express my outrage now. My pre-outrage if you will. Let’s call it anticipatory disgust. Or being aghast in advance. The point is I’m trying to get ahead of my inevitable indignation. This way, regardless of what law is broken, or which murderous dictator gets a pass, I’ll have already vented. Of course, if he nukes Pyongyang or Toronto in order to distract from impeachment chatter, I reserve the right to be upset.

Through his purposeful language discussing “pre-outrage” and “anticipatory disgust,” Lorre emphasizes his concern that President Trump, referred to as “the Gangster-in-Chief” could bring about a catastrophic result for the nation.

Initially, Lorre suggests the issue will merely be about law breaking or if a “murderous dictator gets a pass,” hardly an original criticism from liberals. He concludes, however, by claiming that Trump may actually nuke Pyongyang, with which, unmentioned by Lorre, Trump has had meetings to prevent that very act of using such weapons. All to “distract from impeachment chatter,” something liberals and the mainstream media talk incessantly about, and probably would do so even in the midst of nuclear war.

Lorre claims he’s “already vented” but don’t count on it, especially given Lorre’s track records of bizarre rants going back years against Trump and the GOP overall. Such vanity cards even earned Lorre a bonus lump of coal on MRC’s 2018 Naughty or Nice list. So far, Lorre is not off to a good start for 2019’s list.