Oh look, an unfunny comedian expressed her political views with vulgar language against a member of the Trump family. It seems like an everyday occurance. At this point should we even be surprised?

Ivanka Trump thanked her father for “taking critical action ending family separation at our border” via a tweet. Wanda Sykes, a comedian/actor took to twitter to insult Ivanka saying: 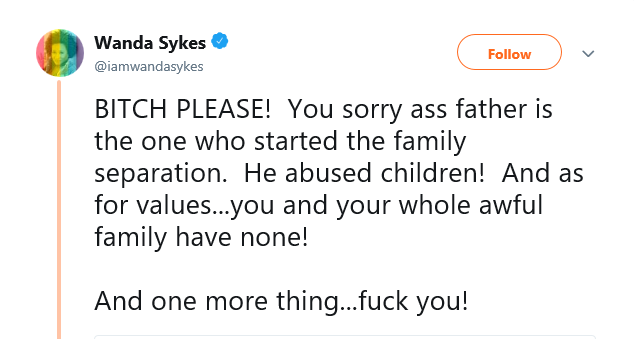 No matter what Trump does or says; they will find a way to attack his family. He does something about the immigration issue, they go after a family member. He doesn’t stop it, they go after yet another.

Kathy Griffin used her twitter last week to tell the world and Melania Trump that, “You know damn well your husband can end this immediately..you feckless complicit piece of shit.”

Samantha Bee went on her TBS show Full Frontal to call Ivanka a “feckless cunt” and to encourage her to seduce her father.

No one in the Trump family is immune to this horrific attack, even 12-year-old son Barron Trump. What happened to leaving the kids out of it? Actor Peter Fonda wanted to rip Barron,”from his mother’s arms and put him a cage with pedophiles.”

Turn on the news and you expect this to happen. What would be surprising is if they’d actually read the news and know what they’re talking about. And then stop attacking innocent members of the family.