GQ is, I guess, a men’s magazine. Or, it’s a magazine for men who like $1,600 leather tote bags and $200 velvet pants. Anyway, GQ clearly digs jerks. Why else would it give Keith Olbermann a web show? And why else would it put Colin Kaepernick on the cover as “Citizen of the Year?” 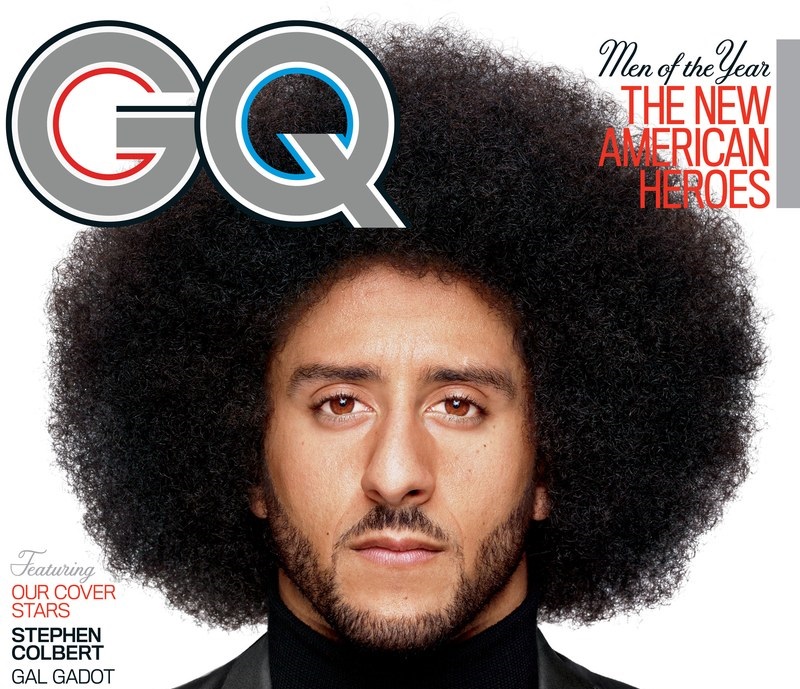 To be charitable, maybe GQ’s editors feel that NFL football is a plague on American society (the “toxic masculinity,” the violence, the concussions?) and are applauding Citizen Kaepernick’s efforts to destroy this national bane.

And what efforts! The national anthem protests Kaepernick started have resulted in half-empty stadiums and helped along a TV nosedive that has viewership of the average NFL game off by 5.7 percent. Advertisers are grumbling, revenues are down and a significant percentage of the country is finding other things to do with its Sunday afternoons. This mediocre QB gets results!

“Though Colin Kaepernick continues his silent protest,” the introduction explains, “he agreed to collaborate with GQ on a special project for our December Men of the Year issue in an effort to, as the piece explains, ‘reclaim the narrative of his protest.’”

Well yeah, except for the “continues his silent protest” bit. He made it plain in the off season that he’d no longer take a knee if only some team would take him. When that didn’t work, he launched a suit against the NFL owners, alleging they colluded against him. Some silent protest.

“Paired with the piece are inspiring images by Martin Schoeller, who photographed Kaepernick in Harlem,” readers are told, “intending to evoke the spirit of Muhammad Ali’s anti-Vietnam War protests in the neighborhood during the late 60s.” I guess the “shoe room” of Kaepernick’s sprawling California mansion would be less “inspiring?”

The best part of this editorial tongue bath is the “ten-person team of his closest confidants” who briefly tell readers just how awesomely woke and caring and brave and caring and righteous and caring this journeyman QB-turned SJW all-star really is. Kaepernick, of course, is a Fidel Castro fan-boy who likes to fund groups honoring convicted cop-killers, so his closest confidants aren’t exactly the Sons of Liberty or even the Algonquin Roundtable.

Women’s March Co-Chair, Hamas cheerleader, Shariah law apologist and all-round nasty piece of work Linda Sarsour fluffed the passer, saying “There might even be a day when we'll be walking down Colin Kaepernick Boulevard and people will remember what Colin Kaepernick did, just like we remember Muhammad Ali.” Just without the talent, style and likability.

Harry Belafonte called Kaepernick “a remarkable young man.” Know who else was remarkable? Colin Powell and Condoleeza Rice. Belafonte called them house slaves to the Bush White House. Ameer Hasan Loggins, a “Writer and U.C. Berkeley academic, lecturer, onetime Bay Area hip-hop icon,” said “His protest has exposed the truth about a lot of people in the NFL, even while he hasn't said anything. I think people underestimate the tactical brilliance involved in that.” The only tactical brilliance I’ve seen was Kaepernick making himself a sacred cow before the 49ers could cut him for his fading talents. But what do I know. I’m not a former hip-hop icon.

Give it to GQ’s editors: they simultaneously threw a bone to their core readership while trolling the 90 percent of men who don’t need $260 sneakers or a $700 Burberry toiletry bag.