What a country! If you’re a famous leftist celebrity, you can gun down a woman on a movie set and then whine that Donald Trump and his supporters made you wet yourself. 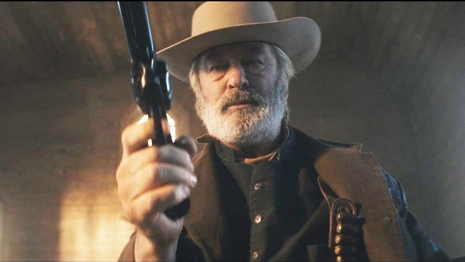 That’s what Alec Baldwin is doing. This week a number of law-enforcement agencies confirmed what anybody familiar with revolvers already knew: Baldwin actually pulled the trigger of the gun that killed cinematographer Halyna Hutchins on the New Mexico set of “Rust” last year. But as Yahoo puts it, what Baldwin is worried about is “potential violence carried out against him by followers of Donald Trump.”

Baldwin took aim at Trump during a recent CNN interview. “Baldwin said he ‘feared for my life’ after Trump told his supporters that the actor ‘probably shot [Hutchins] on purpose.’”

Here was Trump, who instructed people to commit acts of violence, and he was pointing the finger at me and saying I was responsible for the death. 1000% percent I am nervous that a bunch of people who were instructed by the former president to go to the Capitol, who killed a law enforcement officer … you don’t think, that I think to myself, that some of those people are going to come and kill me.

Except of course that Trump – who’s said many, many awful and stupid things over the years – didn’t instruct people to commit acts of violence. And Alec Baldwin did commit an act of violence, inadvertently or not.

What Trump said in an interview last November is: “He’s a cuckoo-bird, he’s a nutjob. And usually, when there’s somebody like that, you know, in my opinion, he had something to do with it.”

It’s just another thing Trump said. Baldwin, because he did a long-running and very unflattering Trump impression – and because he’s an egomaniac – saw a chance to try to make somebody look worse than him in the whole, sordid tragedy. He may or may not be charged with a crime for killing Hutchins, but he’s facing a wrongful death lawsuit from her widower and son.

This battle of the buffoons is beside the point. Baldwin deserves sympathy in the same degree he’s shown courage, compassion and accountability since the shooting. That is, none.