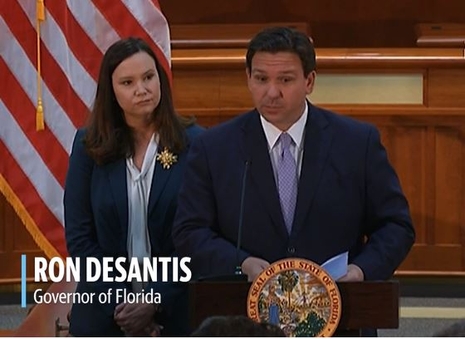 In the era of “toxic masculinity,” second wave feminism and a list of available gender identity options longer than a Cheesecake Factory menu, fatherhood isn’t exactly in a golden age. (Not that mothers – er, “birthing people” – are doing much better.) But fatherhood is about to face its sternest challenge yet: Governor Ron DeSantis (R-FL) is in favor of it.

The Florida governor just signed HB 7065, “The Responsible Fatherhood Act,” which The Hill says is “a $70 million initiative, will provide resources for educational and mentorship programs to help children, fathers and families.”

(Libertarians will balk, but out in California, Palm Springs is paying people $900 per month just to be confused about their gender. Underwriting dads seems like a solid investment by comparison.)

The initiative “aims to encourage fathers to take an active role in their children’s lives and provides grants to community-based membership programming.” It “create[s] a mentorship program to help at-risk youth through the new initiative, hosting various programs such as barbershop talks and fatherhood classes.”

(What’s a “barbershop talk?” I mean, is it shorthand for “personal service provider talk?” I guess it sounds better than a “tattoo parlor talk.”)

The bill is in response to what FLA Republicans call a “fatherhood crisis,” and, as The Hill notes “more than 18 million children in the U.S. do not have a father in their home, according to U.S. Census Bureau data.”

‘This has a severe impact on children, and often leads to dropping out of school, crime and substance abuse,’ DeSantis said at a news conference on Monday.

Unfortunately, if DeSantis declared Puppy Appreciation Day in the Sunshine State, CNN and the Washington Post would immediately declare the country is facing creeping canine Fascism and that Republicans want cats to go back to living in the shadows.

‘This is going to be tremendous and such a good help to fathers in Florida,’ Dungy said. ‘This bill is so important. I want to thank all of the men and women that have been behind this. It is going to allow groups like [Dungy’s own organization] All Pro Dad and people like those here today to do great things for our fathers here in Florida.’

Dungy is an irredeemable Christian who holds unacceptable views on a variety of social topics, including Drew Brees’s right to his own opinion, and throwing ticker tape parades for mediocre gay linebackers.

So the only question now is how long it takes Disney, the teachers’ unions and the Democratic Party in general to come out against fatherhood.