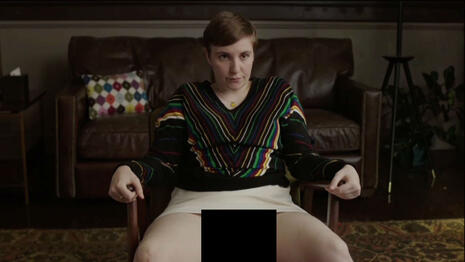 But, fish gotta swim and the creator of HBO’s “Girls” gotta make you reach for the Dramamine. If you’re not familiar with the sister-molesting obese auteur who was once photographed sitting in a toilet stall naked eating birthday cake, you must be livin’ right. For the rest of us, the news that Dunham has a new feature film coming out is only slightly better than learning of a new coronavirus variant

And since Dunham makes one-trick ponies look like Da Vinci, “Sharp Stick” is about [wait for it!] … herself. And sex. And lest we forget the gross factor that has inextricably attached itself to Dunham, she told The Hollywood Reporter’s Seth Abramovtitch of the new movie, “My dad called it a ‘sexual fable.”

Nobody’s looking for Mayberry or Bedford Falls in THR, but Dunham wrote in her memoir about sexually abusing her younger sister. You’d think someone who wanted to stop apologizing all the time would think before she quoted her dad talking up her dirty movie.

But Dunham just can’t stop with the gross. She told Abramovitch that the first story she optioned when she got famous was “Catherine, Called Birdy,” which in her description is “this YA novel about a medieval girl getting her period.'

“Sharp Stick,” Abramovitch says, is about Sara Jo,“a 26-year-old woman whose carnal development is interrupted by a hysterectomy at age 17. When Sarah Jo, a babysitter, loses her virginity to her employer ... it unleashes within her something wild, alien and wonderful.”

Not gross at all.

“It was about trying to understand the impact [my hysterectomy] had on me,” Dunham says. “It was about processing my life. And then, obviously, it becomes about the characters — and not about you at all.”

Except that nobody is more solipsistic than Dunham. Everything is about her. And she’s so misunderstood. She complained to Abramovitch:

People had a very swift and strong and allergic reaction to what I looked like, and they made it very clear to me,” Dunham says. “I was getting messages — many, many, many of them a day — about what I looked like. Things most people will never have said to them in their lives because most of polite society keeps people from walking up to each other at a Target and going like, ‘You’re fat, you’re ugly and you deserve to die.’”

Well, people are cruel. On the other hand, if you spend every possible second you can on screen naked, well …

“She estimates half of the messages came from women. “I think people would think it would be like Trump-loving men in the heartland,” she says. “But it was women.’”

And therein is the most inescapably gross thing about Dunham. She’s a nasty bit of work who doesn’t care much for the truth or justice or anyone but herself. In the memoir where she talked about groping her baby sister, she infamously accused a man, (the president of the Oberlin College Republicans, for all love), of raping her. He didn’t. Then she initially supported a male producer on her show against a rape charge, only to reverse course when the @MeToo mob turned on her.

Given her irresponsibility, narcissism and obvious disinterest in anything outside her privileged bohemian brat experiences, one would expect a merciful God to spare us more of her oeuvre. But somehow, we really must have ticked off The Big Guy this time.