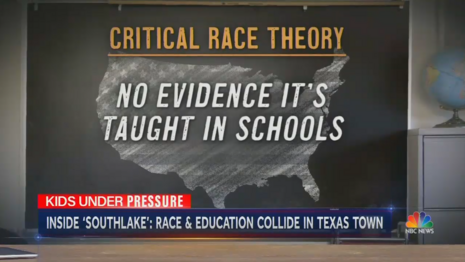 Turns out, whether progressive politics are part of the curriculum or not, some 500 U.S. school districts make it part of their hiring practices, using “cultural competency” questions to find out if Ms. Crabapple subscribes to right-think.

According to the Daily Mail, districts “ask applicants how they would incorporate race and gender into their daily lessons and about what they have done to combat racism in their personal and professional lives.”

And of course, they have artificial intelligence to help them eliminate potential enemies of the revolution. “Some of the teacher's answers are filtered through Nimble, a teaching-hiring software company,” the Mail said. (Wokeness is definitely a growth industry.)

“Nimble founder and CEO Lauren Dachille told Ed Week that the demand for cultural competency reviews have shot up following the death of George Floyd and the Black Lives Matter movement last year.” Saint George – the victim who launched a thousand grifts.

And they might be more disturbing. Montgomery County, Maryland Public School District wants to know how applicants “would incorporate race, gender and cultural diversities of students into their daily instruction plan.”

“Sometimes, candidates will talk about equity and justice but not talk about race. Sometimes, they're not comfortable yet having a specific conversation about race in the classroom. Moseman said. “That's fine — that's where [they] can grow as an employee.”

And that's before the teachers' union gets a hold of them.

You, dear reader, may be asking “But can they freakin’ teach?” If so, you are an irredeemable racist, and exactly the sort of person they don’t want in public schools.