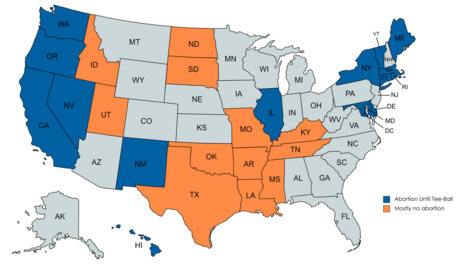 The most damning criticism of abortion is that it’s the taking of an innocent life to avoid inconvenience. So of all the panicked complaints from the left about the possible overturning of Roe v. Wade, the most fatuous is that it will make getting an abortion…inconvenient.

But that’s what Axios is arguing when it predicts that post-Roe, “Abortions could require 200-mile trips.” Two-hundred miles to snuff out a life? The injustice. It could be the result of Dobbs v. Jackson, for which SCOTUS heard arguments December 1.

Axios says that “12 states will immediately restrict abortion if Roe disappears, and others would be likely to impose significant new restrictions.” On the other hand, 16 states -- mostly the usual suspects -- have codified the right to abortion in state law. Sounds like federalism. A victory for the constitution.

But that’s the problem. Abortion true believers want to make sure that from sea to shining sea a woman doesn’t have to go further than the nearest Starbucks to destroy God’s greatest miracle. Without Roe, Axios warns, “The percentage of people living over 200 miles away from a provider would increase from 1% to 29%.”

Put another way, “the average American could have to travel around 125 miles to reach the nearest abortion provider, compared to the current average of 25 miles.”

Dark tidings indeed. Round trip, that could take most of a day, and at least a couple of tanks of gas. Say, Joe Biden may want to loosen up drilling and pipeline restrictions to bring gas prices down. So overturning Roe would be a victory for life, morality, the constitution, federalism and the American consumer. Winning.