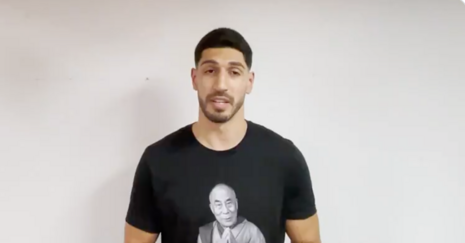 Another season, another opportunity for the NBA to disgrace itself. The league’s been a prodigy of cowardice and hypocrisy in its efforts to ingratiate itself to the communist government in China and ensure ongoing access to that huge market. And along comes a loose cannon player insulting the CCP and honcho Xi Jinping himself.

According to the Washington Post, Boston Celtics star Enes Kanter posted a video to Twitter Wednesday calling for Tibetan independence, “a stance that is illegal in China.”

“Brutal dictator of China, Xi Jinping, I have a message for you and your henchmen,” he said in the video. “Free Tibet, free Tibet, free Tibet.” He was wearing a T-shirt featuring an image of the Dalai Lama, the exiled Tibetan spiritual leader whom Beijing considers a dangerous separatist.

Yes, that little guy with the glasses in the saffron robe? Watch out for him. And good on Kanter.

But the CCP takes this stuff very seriously. “The Chinese video-streaming giant Tencent cut the live broadcast of Wednesday’s NBA game between the Celtics and New York Knicks,” the Post said. Apparently, all Celtics games have been scrubbed from the app.

The big question, however, is how craven will the NBA’s response be? For their part, the Celtics wasted no time. Per the Post:

Kanter had planned to play Wednesday’s game wearing a pair of sneakers emblazoned with the words “Free Tibet” and an image of a man self-immolating, a desperate form of protest to which Tibetans have sometimes resorted, said Badiucao, a prominent overseas Chinese political cartoonist who painted the designs on the shoes. Kanter was not given the chance: Coaches did not send him onto the court on Wednesday.

China will let the NBA know what it has to do to get back in its good graces, and the league will do it. Then they'll go back to lecturing the rest of us about social justice.