With 'Black National Anthem', NFL to Double Down on Viewership-Killing Wokeness

NFL Commissioner Roger Goodell seems to believe his place these days is out in the street on his knees, surrounded by a howling Black Lives Matter mob, while confessing his privilege and begging forgiveness for being white. 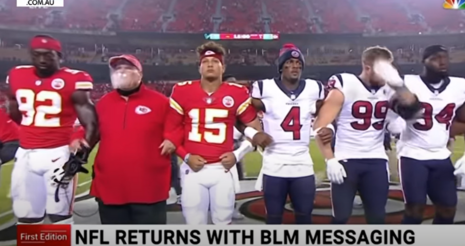 Which is fine. Humiliation is a turn-on for some people. The problem is that Goodell insists the NFL join him on the pavement. According to a report from Michael McCarthy at Front Office Sports, the NFL is bringing back a whole lot of the anti-racism virtue signaling that made pro-football unwatchable last season.

The NFL also plans to make “Lift Every Voice and Sing” — often referred to as the Black national anthem — a prominent part of all big league events, said sources. They will likely highlight victims of racial injustice with a “Say Their Stories” project, as well.

Rumor has it they may try to squeeze in a few downs of football too.

Sure, it’s farcical and craven, but think how good it will be for business … er, wait. Turns out there’s plenty of evidence that when televised sports go woke, viewers go away.

MLB just suffered the second worst ratings for an All Star Game in history after pulling the event from Atlanta over a Georgia voting security bill. As McCarthy notes, the NBA “has removed most of the social justice signs and messages that were prevalent on courts and player jerseys last season. Commissioner Adam Silver said those messages are being largely delivered off the floor.” Silver’s predicting a “return to normalcy” in the coming season

And then there’s the NFL itself. McCarthy:

At the height of player protests during the 2016-17 seasons, the league’s once impregnable TV audiences plummeted 8% and 10% respectively.

As the protests receded, the NFL’s TV audiences bounced back to grow 5% apiece during the 2018-2019 seasons.

But average audiences fell 8% to 15.1 million viewers in 2020 as the league embraced social justice messaging on helmets, warm-up gear, fields and stadiums.

That translates into billions of dollars lost. Easy come, easy go. But the chance to soothe the conscience of the feckless, cowed commissioner? Priceless.