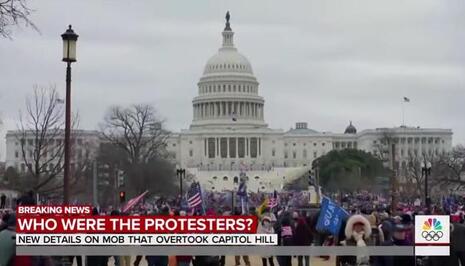 “It’s tempting to think of the storming of the US Capitol on Wednesday as toxic masculinity run amok,” wrote Anna North on Jan. 15. You know, “a mob of mostly white men, carrying guns and wearing animal skins, trying to overthrow democracy on behalf of a president who once bragged about his ability to grab women ‘by the pussy.’”

Yes, tempting. It’s also tempting to say that the rioters were a collection of troublemakers and extremists of varying degrees of dangerousness and unrepresentative of the millions of Americans who don’t subscribe to progressive orthodoxy. But that temptation isn’t reductive enough or intellectually vacuous enough to snare a Voxsplainer. Their stock in trade is giving lefty groupthink an intellectual patina, and then telling readers why it’s even worse than they think. North’s piece is a tour de force of the genre. You see, behind every great white man …

Yep. White women were complicit in the Capitol violence, and North gave examples -- from the woman shot to death inside to the mom who wasn’t there but refused to trash her nutty son who was. And it shouldn’t be surprising:

White women have been part of white supremacy in America since the very beginning, experts point out, dating back to their role in slavery. “They were at the table when the system was designed,” Stephanie Jones-Rogers, a history professor at UC Berkeley.

Ouch. Turns out pale chicks were a big part of the KKK and “they were key players in the fight against the integration of schools.” Today, said North, “women hold a key role in spreading QAnon ideology and sustaining white nationalist groups and movements.”

Furthermore, “if we ignore the importance of women in the Capitol riot and the groups that backed and enabled it, we can’t understand white supremacy in America — let alone dismantle it. Trying to fight racism in America without looking at white women, Jones-Rogers said, is like ‘addressing only the right side of the body when the left side is still sick.’”

This, of course, presupposes that there’s a pressing need to deal with white supremacy. Lefties have been telling us since the rioters were still in the Capitol that they were motivated by racism.

But leftists think racism is behind every political impulse to the right of Leninism. (They don’t really think that, but it’s a handy stick to wield.) Evidence doesn’t matter. You just have to take their word for it.

“And that [white women as virulent racists] dynamic has continued into the 21st century, North assured readers. “The landscape of white supremacy has changed, with the Klan no longer a major player (though it still exists). Today, white nationalism is less about specific groups and more about ‘an ideology that people subscribe to from the comfort of their own desks,’” an author named Seyward Darby told her. The left hasn’t just moved the racism goal posts, they’ve taken them away and buried them.

North went on to talk about women’s roles in a bunch of unsavory groups and events -- mostly QAnon, but some Trump-centric stuff too (the horror!) None of it makes a case against white women as such or in general. Bad people of every race do dumb stuff, and dumb people of every race do bad stuff. North doesn’t care. Probably neither does anyone who voluntarily reads Vox.

But in case those readers didn’t get it the first time, North repeated herself, stressing again that “ignoring the fact that women have long been perpetrators of white supremacy — up to and including violence — will hamper any effort to truly fight it.”

There’s no defending anyone -- male or female -- who joined in the Capitol lawlessness. And it’s hard to look at QAnon subscribers with anything but alarm and maybe pity. But the media lefties have so larded their own hopes, fears and preoccupations (often all the same thing) onto the incident that it almost doesn’t matter what really motivated the jackasses. The left has a narrative. They’re emboldened, vindictive and no mood for nuance. Cancel ‘em all. Let God sort ’em out.

So listen up, white gals, and realize your place in the food chain of the Wild Kingdom of Woke. North, who is herself severely melanin-deprived, is putting you on notice -- the revolution won’t spare you. Sure, the useful idiots at USA Today will play sob sister and allow you to do your own kvetching about toxic white maleness, but Vox is closer to the zeitgeist and it’s onto you.

According to the hard calculations of pseudo-history and remorseless logic of identity politics, you’re third-rate victims at best. So try not to be home when they come for your men.