From Lay-Ups to Lay-Offs: Trouble for ESPN 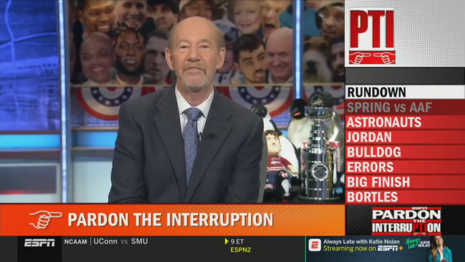 Any way you look at it -- and judging from the ratings, you haven’t looked at it -- 2020 has been a disaster for spectator sports. Covid interrupted or delayed all the major professional sports for long months, and when they did resume, they were made unwatchable by Black Lives Matter antics. Even an excellent World Series won by a major-market franchise drew 32% fewer viewers than last year.

The annus horribilis is taking a toll on sports media. ESPN just announced it will lay off 300 employees and not fill 200 already vacant positions, according to Outkick:

“Prior to the pandemic, we had been deeply engaged in strategizing how best to position ESPN for future success amidst tremendous disruption in how fans consume sports.” ESPN chairman Jimmy Pitaro wrote in a memo to employees, obtained by OutKick. “The pandemic’s significant impact on our business clearly accelerated those forward-looking discussions.  In the short term, we enacted various steps like executive and talent salary reductions, furloughs and budget cuts, and we implemented innovative operations and production approaches, all in an effort to weather the COVID storm.”

While this is horrible for the technical and production professionals impacted, one would need a heart of stone to read of ESPN’s troubles without laughing. The network’s stable of on-air personalities is long on smug, disdainful and self-satisfied blowhards who love hearing their own woke sermonizing. It’s short on, you know, sports analysis.

Another factor mitigating grief is that ESPN is owned by Disney. The House of Mouse has laid off 28,000 park employees, sadly. But if tight budgets mean the studio doesn’t vomit out yet another Star Wars sequel, or has to shelve that live-action reimagining of Steamboat Willy as a black lesbian, well, you take the bad with the good.

The belt-tightening is by no means limited to ESPN or Disney. According to Outkick, “NBC Universal layoffs impacted up to 10 percent of their 35,000 employees, including many at NBC Sports. CBS News was hit with layoffs in May. Fox Sports laid off between 50 and 100 staffers in July.”

Times are tough, no question. If ESPN really wants to do the right thing, it would keep its production and tech folks and fire its “talent.” Then it could go to bars and find the loudest, angriest drunk liberals and hire him for a song. Ratings might improve.