Does the NBA Have a Conscience? League Cut Ties to Chinese Academy

Let’s face it: “Uyghurs” isn’t easy to spell, and “Stand With Hong Kong” is kind of long for the back of a jersey, at least compared to “BLM.” And being confronted with actual systemic oppression is pretty embarrassing for millionaire athletes who fancy themselves social justice warriors. So the victims of the Chinese communist government really couldn’t expect even a nod from the oh-so woke pro basketball players of the NBA. Besides, somebody in the league already tried to call out China. It didn’t end well. 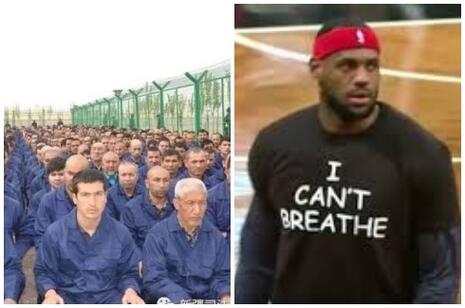 So it’s surprising to learn that the league has done something vis a vis China that might qualify as righteous, although it took an inquiry from a U.S. senator to get the NBA to admit it. “The NBA has terminated its relationship with a Chinese-based basketball academy located in the controversial region of Xinjiang,” Sports Illustrated is reporting. Xinjiang is where the communists keep all their Muslims, including the Uyghurs, who are forbidden from practicing Islam and are warehoused in concentration camps. Consequently, “a member of the United Nations human rights panel condemned Beijing for turning the region into a ‘no rights zone.’” (If the UN won’t overlook communist oppression, things in Xinjang must be very bad indeed.)

Back on June 30, Sen. Marsha Blackburn (R-Tenn.) sent the NBA a letter inquiring about the league’s ongoing business arrangements with the totalitarian regime -- specifically asking about the Xinjiang academy. SI obtained a copy of the league’s response to Blackburn, penned by league Deputy Commissioner Mark Tatum and sent July 21. Tatum gave terse answers to several questions, and offered one sentence about the Xinjiang academy: "The NBA has had no involvement with the Xinjiang basketball academy for more than a year, and the relationship has been terminated."

Hm. Tatum didn’t say why, and he doesn’t seem happy about it -- something Blackburn noted in a statement on the response. “The reply from … Tatum lacks the appropriate concern and responsibility that should accompany congressional correspondence. These technical answers do not address the larger questions about whether there is a conflict between their financial decisions and professed values.”

On the other hand, the NBA is no longer running a scouting and development shop next to concentration camps. Even in size-17 sweat-shop produced Nikes, baby steps are welcome.