I believe it was Douglas MacArthur who said, “Old bolsheviks never die, they just … get fawning writeups in The New York Times.” Okay, he didn’t say that, but he would have been prescient had he. Just look at octogenarian embarrassment Jane Fonda. 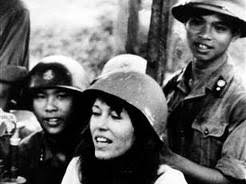 We’re almost 50 years on from her very public aid and comfort to the enemy of the United States (and a horrible blow to the morale of U.S. POWs in North Vietnam) and Fonda is back doing what she can to docomfit the American people and their way of life. Admittedly, that’s not much these days — phony arrests at climate change sit-ins are no substitute for delivering commie-penned radio addresses falsely accusing America of war crimes — but it’s good enough for Cara Buckley at The Times.

Buckley tells us that Fonda “81, moved to Washington in September to highlight the urgency of the climate crisis by staging protests at the capitol.” Smart — avoid the commute. And if I had a carbon credit for every time I heard someone say ‘You know, I think Jane Fonda staging protests really underscores the urgency of this climate crisis,’ I’d own as many houses as Al Gore.

To Buckley, Fonda is like an incorrigible old aunt who never quite shook her rebellious streak. We’re supposed to admire the youthful fire in the belly she still has for bettering the proletariat, even as she cracks jokes about “adult diapers.” Her current TV show, Grace and Frankie with Lily Tomlin, is about two old ladies who go into the sex toy business (a rackett she, apparently, isn’t unfamiliar with in real life.) Such verve! What spunk! How gross and utterly lacking in dignity

But Jane’s not just protesting. Buckley notes that Fonda’s “been arrested every Friday for the past four weeks, often with a famous friend in tow: Sam Waterston, Ted Danson … Catherine Keener and Rosanna Arquette.”

She even spends a night in jail now and then!

Buckley admits “celebrity activists make for soft targets.” No problem. Targets can be hardened with, say, a Soviet-made anti-aircraft gun (they also make for terrific photo-ops!) And Fonda’s no hypocrite … er no more than any other wealthy leftist. She “drives an electric car, eschews plastic, eats less red meat and has cut down on air travel” (she flies commercial). On the other hand, Buckley’s piece begins with an anecdote about “a member of her social media team.” The Revolution will be tweeted, comrade actress.

It’s easy to forget as we endure the scourge of Bernie Sanders, AOC, Mayor Sandinista and Warren, Medicine Woman that the West did, in fact, win the Cold War. The Berlin Wall came down, freedom broke out, history ended, etc. etc. It really happened.

But no matter. There’s always a kind word at The Times for a Red Depends Baby.