Leave it to the Washington Post to pioneer coverage of what may be the next great civil rights struggle. Food reporter Tim Carman has uncovered the white supremacy inherent in supermarket organization. According to food influencer David Chang (yeah, that’s a thing, I guess) “the ethnic food aisle, that is sort of the last bastion of racism that you can see in full daylight in retail America.” 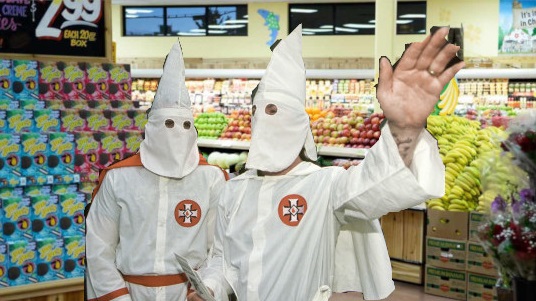 Come on now, you know what he’s talking about. Picture the ethnic food aisle of your local Giant Food Way Lion. It’s not like the rest of the bright, clean, well-ordered aisles, is it? It’s a dark, chaotic ghetto glowering among the gleaming streets of the grocery metropolis. It's thronged with old women selling plucked geese and one eyed men betting on cock fights. A place polite people don’t mention at the dinner table.

No? Okay, maybe that’s just my local supermarket. Anyway, David Chang, who influences food, thinks you probably think about it like that. And Tim Carman, who writes about food, says that “to others, especially children of immigrants who may already feel pushed to the margins of the American mainstream, the supermarket can be just another place to experience the sting of their outsider status.”

Man, the children of immigrants are some fragile little cupcakes.

The sting occurs whenever they walk down the “ethnic” food aisle, the section of the supermarket that, to some, plays out like a remnant of the Jim Crow era, when laws established separate facilities for African Americans in the post-Reconstruction South.

“It is something that’s got to go,” Chang says of the ethnic food aisle. (Chang may want to rethink that. “Separate but Equal” is all the rage on college campuses. Who’s to say “ethnic student centers” and “ethnic-only graduation ceremonies” won’t be next.)

“To Chang’s way of thinking, these aisles continue to exist because nobody wants to talk about them,” Carman says, “which was certainly true about the publicists I contacted for this story. Representatives of Whole Foods Market, Giant Food, Kroger, Albertsons (which includes Safeway stores) and Harris Teeter either declined to comment or did not return multiple phone calls for comment.”

(Could it be that some things are just too stupid to comment on?)

Whatever their intentions, these international food aisles had an impact on Chang as he grew up in Northern Virginia. He remembers his parents shopping at two grocery stores — one that specialized in Korean foods, and the other a supermarket with “ethnic” food aisles — and the memories were imprinted on his brain at an early age. The two stores, the separate aisles dedicated to international foods, his food: They were a reminder to an impressionable Chang that he was different from white America.

Carman tells us Chang was a “child whose food was mocked by peers at school. A child who constantly tried to merge into the mainstream but encountered roadblocks.” They mocked his lunch? Oh cruel white privilege!

It’s tough for a kid, scarred with the memory of hellish suburban grocery stores. It’s a credit to Chang that he’s overcome the worst a racist nation and its exclusionary supermarkets could throw at him to become an influential influencer of food, and stuff.

As for the rest of us, how long before a condiment is judged not by the name on its label, but by the contents of its bottle.