Christians, stop what you’re doing. You’ve gotten Christianity all wrong. Theologians, Doctors of the Church, saints, martyrs and mystics -- not to mention the countless generations of believers -- you’ve mucked it all up. Oh, don’t feel too bad. You haven’t had the benefit of doctrinal and spiritual guidance from a guy who writes comic books for a living. 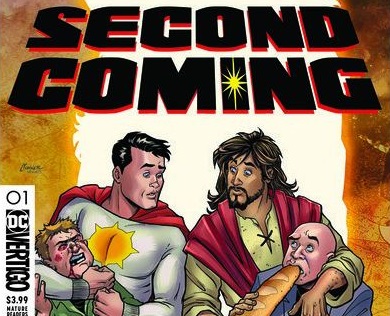 But D.C. Comics is about to put you right. Based on its experience running its own “universe” populated with sooper dooper action heroes with gills and heat vision and lycra, D.C. is going to clue us in on the central mystery of our own universe with a new comic book series called Second Coming. It’s about Jesus.

“Cool,” you say, “the original superhero. Perhaps this will make the Gospels more accessible to fantasy sodded adolescent boys and the men they never quite become.” But there you go again being too darned Christian. You think far too well of your fellow humans. Here’s comic book writer Mark Russell describing his Second Coming concept to Bleeding Cool:

An all-powerful superhero, named Sun-Man, has to share a two bedroom apartment with Jesus Christ. The conceit is that God was so upset with Jesus’s performance the first time he came to Earth, since he was arrested so soon and crucified shortly after, that he has kept him locked-up since then.

(And the whole, “This is my son, in whom I am well pleased …” Never mind.) So far, so juvenile. Care to elaborate, Mark?

God then sees this superhero on Earth a few thousand years later and says “that’s what I wanted for you!” He sends Jesus down to learn from this superhero and they end up learning from each other. They learn the limitations of each other’s approach to the world and its problems.

Sun-Man, Russell says, “is like the varsity quarterback son God never had.”

Honestly, if that’s all this was -- an adolescent send-up of Christian belief in a fundamentally adolescent medium -- it wouldn’t be worth noting. But Russell has read the Bible, and even written books about it. And he knows you’re doing it wrong. “We really misunderstood the teachings of the Bible and of Christ. The Christian religion doesn’t really base itself on what he taught, particularly in the modern Evangelical megachurches.”

Megachurches? They are kind of easy to make fun of -- the scale, the spectacle, the special effects employed in telling the same old story a different way. They’re kind of the $200 million sequel of the Christian universe. Russell elaborates:

[Jesus] goes by a megachurch and they have a billboard of this Tom Brady-looking Jesus Christ throwing a football and he doesn’t even recognize himself which is a metaphor for him not recognizing what’s been done with the religion that bears his name.

Well yeah, I guess Drop-Back Jesus is pretty silly. On the other hand, He has to compete for the attention of people who demand serial-quipping mutants with death rays and exploding stars. It’s not easy getting through to an audience that needs it’s reading material chopped into three sentence bites (punctuated with “BIFF!” and “BAAM!”) accompanied by big, colorful pictures.

So is Russell just trolling the believers? Maybe, but it sounds more like he’s here to make us all super, one colored panel at a time:

We need to rethink the ways to get the human race to play nice with itself because the ways we’ve come up with thus far, bribery and revenge, haven’t solved anything. We’ve been nailing criminals to crosses, in one way or another, for two thousand years and we still get more criminals. It solves nothing.

Unless you happen to believe that one criminal nailed to the cross two thousand years ago solved everything that can be solved. But that requires humility, which is not something you often find in people who believe they control a universe.