The column that peaks over the edge of the progressive abyss ...

Turns out the Washington Post is good for something besides being a puppy wee-wee pad or making spitballs to shoot at the interns while straws are still legal. Specifically, if not the Post and its flaky feminist subsidiary The Lily, I wouldn’t know that Zoe Hollomon, “a 39-year-old black queer activist in Minneapolis, represents synchronized swimming — and its future.”

This crucial information comes courtesy of a Lily story on “the Subversive Sirens, which is made up of five women in their late 30s and 40s. They encourage a looser, splash-friendly synchro style that mirrors the open, inclusive image the team presents.” The ladies “are mostly queer and mostly women of color. They demonstrate how all body shapes and sizes are beautiful, strong and capable of doing amazing things.”

Good on them. Middle-aged plus-size women doing synchronized swimming is great if that’s your cup of tea. It’s not for everybody.

“We feel like it’s really for everybody,” Holloman told The Lily, “and in particular for women of color and queer women.”

Word is getting around. Another team member said “We are getting messages like, ‘Hey, I’m fat. I’m queer. I used to do synchro in fourth grade — can I join you?’” (How’s that for speed-dating line?)

Because nothing can be just an activity, they “ground their practice in queer and black liberation theory.” The Lily enthuses, “In the pool, the Sirens are captivating. They are unified in their belief that joy is a radical act. It’s a team of black liberation and social justice artists who are bringing their vision of self-care as an artistic practice poolside.”

Next month, they’re taking their queer and black liberation self-care joy to the Gay Games in Paris, where there’s going to be more joy, because the Gay games are joyous. “Everybody’s gay and happy … there’s a breathable joyousness and celebration,” Harriday said. “It’s this cultural and community event, and it’s amazing because you’ve got people who are Olympic-caliber athletes — [and] people who are not.”

Oh yes, there will be joy. “Plus, synchronized swimming is kind of a femme lesbian dream come true, Messerole said: ‘I get to be sporty, but I get to do it in a sparkly costume.’”

Imagine there’s no Yoko … Cicadas come out every 17 years, make a God-awful racket for a while, and then go away. So does Yoko Ono. 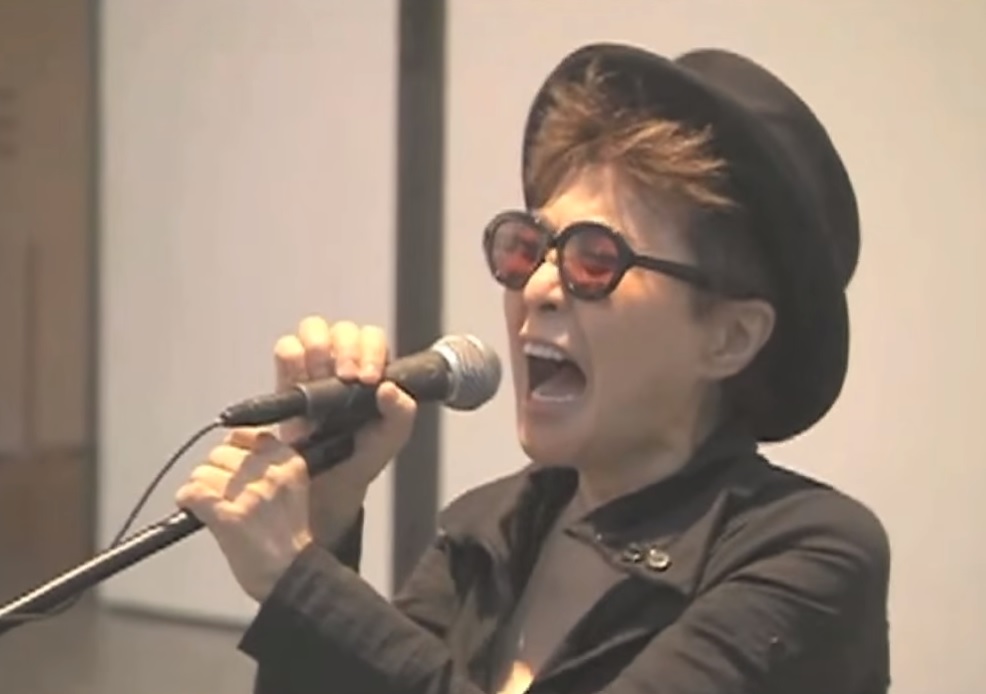 The difference is that there are liberals who seem to feel obligated to take the Yoko nuisance seriously. So Newsweek (or what’s left of it) bothered to review a “song” from an album Yoko is threatening to release in October. And get this, according to Zach Schonfeld, the writer who drew the short straw: “Newsweek is exclusively premiering the music video, which features original drawings by Ono to accentuate the track's sense of urgency.” Wow, “exclusively.” So what does the track sound like?

The pioneering artist's new album, Warzone, includes a song with the same name—a reimagining of a 1996 track. The arrangement is eerie and minimalistic, with machine-gun splatters accompanying macabre piano notes. Ono's vocals become increasingly anguished as the song progresses: "If you hear me, please help us," she sings at the end.

No she doesn’t. She warbles it. She whines it. She screams it. Yoko doesn’t sing. It's unlistenable garbage. And those unfortunate enough to be subjected to her album -- uncooperative terrorists at Gitmo perhaps -- will know it.

Warzone will be released on October 19. The album revisits timely songs from throughout Ono's career, including "Woman Power" (from 1973's feminist-themed Feeling the Space) and "Imagine," from Lennon's 1970 album of the same name. (Ono received a belated co-writing credit for "Imagine" last year.) The recordings are stripped bare to emphasize Ono's messages, which seem newly charged today.

(The co-writing credit for Imagine is long overdue. No single human being could have written a song so astonishingly awful.) So she’s hawking a bunch of retreads because, at 85, she sees one last shot a relevance. Well, bless Newsweek for humoring the old girl. And again, congrats on the exclusivity guys.

Next up: Pretend gynecologists for trans women. Ready to pretend you’re “marrying” someone of the same sex? There’s a woman in Oklahoma who’ll be happy to pretend she’s your enthusiastic mom at the ceremony. According to NBC, “Sara Cunningham, a 54-year-old mother of two and an ordained minister, wrote her Facebook post after hearing from several same-sex couples without a supportive parent on their wedding day.”

Cunningham said several women had shared with her emotionally devastating stories at a same-sex wedding rehearsal in which Cunningham was participating.One woman recounted how her mother asked to be given "a heads up" when it was time for her daughter to kiss her bride, presumably so her mother could turn away. Another woman shared how her mother chose not to attend.

So she became a rent-a-mom. Oh, I doubt she makes any cash, but I sense opportunity. Don’t have a drunk old Uncle Mel who keeps asking why there are fellas dancing together? A goth cousin who’d black lipstick may or may not be permanent? Rent them! There could be troupes who’ll pretend to be your entire wedding party. It’’s perfect for the times. If I identify as a halibut, you’re obligated to cover me in a beurre blanc and serve me with a crisp white. Who’s gonna question whether that really is your Aunt Phyllis?

It’s been done before. When Kim Jung Il (father of the current Dear Dumpling) croaked, the regime broadcast thousands of peasants whipping themselves into public displays of grief. Presumably, the more distraught one acted, the bigger your rice ration. But your Rent-A-Family (™) will be throwing rice, not praying for it.

Why, you could even rent a baker and have him refuse to bake your wedding cake. You can then pretend to be incensed, report him to your state’s Orwellian civil rights body and laugh and laugh as his business is ruined and he’s berated as a Christian bigot.

Yeah, there’s some serious coin to be made off of this pretend world.