Pity ABC, NBC and CBS News. If the fall TV season comes and Sean Spicer is no longer White House Press Secretary, they’ll have to talk about something besides Saturday Night Live. Like maybe … news.

Spicer is rumored to be leaving the press shop for another job in the administration. And if he’s not the daily face and voice of the Trump administration, it’s going to be hard for actress Melissa McCarthy to reprise her lampoon of him on SNL. And that will leave some serious holes in the networks’ “news” programming. 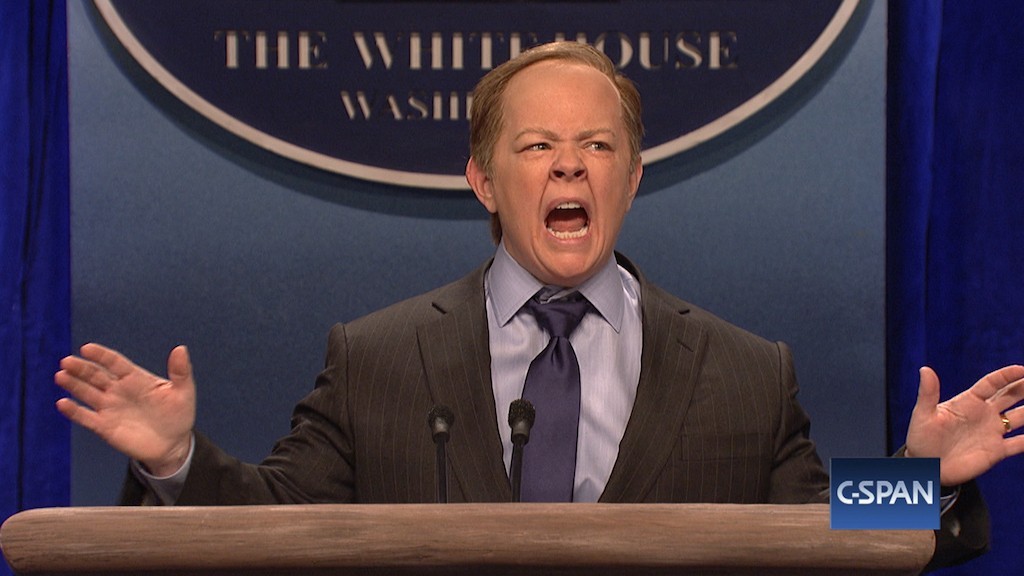 Between inauguration day and the season’s end on May 20, the ABC, NBC and CBS news programs couldn’t get enough of Melissa McCarthy’s Spicer. In fact, the networks dedicated 10 minutes and 49 seconds of airtime just to the impression. But while they were enjoying partisan satire that fit neatly with their biases, there was actual news they could have been reporting.

Baltimore, for example. According to a Reuters report from May 2, “homicides in Baltimore have reached such alarming levels that the mayor is getting federal assistance and requesting more support from the FBI. For the first time in nearly 20 years, the city of Baltimore, Maryland, has experienced more than 100 murders before the end of April.” The networks haven’t reported once on the carnage or the mayor’s unprecedented plea for help. Baltimore crime received just four minutes and 18 seconds of attention on the networks – most of it reporting the hunt for “Baltimore’s Public Enemy #1,” an alleged arsonist who firebombed a home in March.

What’s more, the networks were happy to talk about police abuses and corruption in Baltimore. All three networks reported when seven Baltimore police officers were were arrested on federal racketeering charges on March 2. On May 9, CBS Homeland Security Correspondent Jeff Pegues told This Morning that “In Baltimore, it was found that 44 percent were made where 11 percent of the population was, and that was primarily the black community.” So the networks know Baltimore exists, and it has a problem with police.

Unfortunately, since the 2015 riots – and the larger Black Lives Matter zeitgeist (including the “hands up, don’t shoot” lie the networks helped spread) – Baltimore police have backed off aggressively policing in black neighborhoods. Not coincidentally, the murder rate has skyrocketed. At this writing, according to the Baltimore Sun, there have been 161 homicides in the city since January 1.

But really, why would the networks talk about real world consequences of the narrative they helped create? When comedians are making fun of people you don’t like, “It’s so very entertaining,” as Gayle King said of McCarthy on the April 17 CBS This Morning.

In a May 12 publicity stunt for that week’s SNL, McCarthy dressed as Spicer and drove a motorized podium around Manhattan. NBC News hyped it, but so did ABC. On World News Tonight with David Muir, the anchor introduced the video saying, “Live from New York, a little early.”

In fact, ABC and CBS are just as enthralled as NBC with McCarthy’s shtick. ABC gave her Spicer two minutes, four seconds of coverage. CBS gave it two minutes, 48 seconds. All that for a show on a competing network. ABC’s Good Morning America had an entire on February 13 wondering if SNL had “pushed its politics too far.” If only GMA had the self-awareness to wonder if it had pushed its SNL fixation too far.

If Spicer is no longer a viable target for McCarthy next season, ABC, CBS and NBC may have to turn to other viable targets, like the tragic ones in Baltimore.