From Hollywood, an Anti-Trump Picture Book for ‘Adults’

Dissent may be the highest form of patriotism (when the GOP has power, anyway) but circulating nasty drawings of political opponents has to be the lowest form of dissent. And that’s what the left’s giant temper tantrum has come down to. 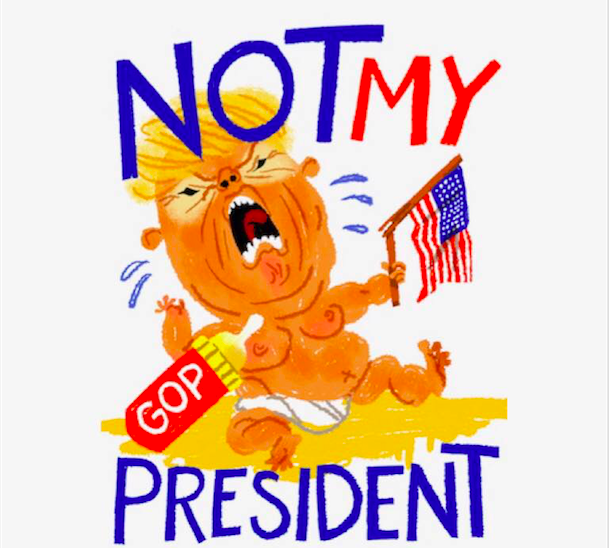 According to LA Weekly, “illustrators from studios including Disney, Sony, Nickelodeon and DreamWorks have gotten together to collaborate on the picture book Not My President. A crowdfunding campaign is in progress, and proceeds will support the ACLU, Planned Parenthood and L.A. Justice Fund.”

The drawings are all too predictable: Trump as Fascist, Trump as diaper-clad infant, Trump supporters as racists. This is not high-brow political commentary. In fact, the article describes it as a “children’s book for adults.” Of course, take “adult” for what it’s worth.

Truth is, whatever you think of Trump, juvenilia like this ain’t about him. Check out this explanation from the project’s creative recruiter, Alison Mann:

I was really feeling demoralized and angry about what was happening in our country, and I wanted to channel my energy into something positive. One day I was sitting at home with my husband and our twin babies reading a bunch of different children's books of all shapes and sizes, and thought of a protest book for adults inspired by colorful board books for children. From there I shared my idea with a couple of like-minded friends, Kristine Eckert and Stephanie Perea, who I was hoping would love the idea and want to collaborate on the project. They were both excited about the idea and jumped onboard. [emphasis added]

It’s all about the feelz, gang. Highchair pounding never felt so high-minded.

Another artist on the book “thinks it's incumbent on creatives to use their talents to resist the Trump agenda,” whatever that really is.

“As far as feeling vulnerable, I think that we do feel particularly vulnerable. While I am a U.S. citizen, a lot of my peers in studios are working here on visas, and are very troubled about the prospect of having to leave their careers, friends and livelihoods,” she says.

Yup, trump’s coming for your French makeup artist, and your Irish set-designer, and maybe the quaint Italian guy that runs catering. Further, “if unions are broken up and the [Affordable Care Act] is repealed without a replacement, I really don't know what I will do about health insurance.” Trump’s a union buster? Wow, somebody might want to tell these guys. And please, talk some more about how tough life is in Hollywood.

Yes, these people are selfish and stupid -- nearly as stupid as the question LA Weekly’s Gwyned Stuart asked: “whether they fear they'll face retribution from their studios for working on something so overtly political.” Spoiler: they didn’t.