You silly American. You thought Meryl Streep’s six minute Golden Globes rant was just another instance of an entitled Hollywood gasbag using her position to speak whatever the opposite of truth to power is. You probably chafed at being talked down to by a political partisan who’s forked over six figures to Democrats in just four years. 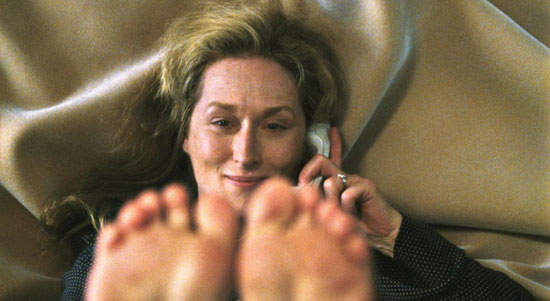 Well, The Washington Post has news for you: the part self-congratulating Hollywood pap and part anti-Trump screed was a “wake-up call” and a “dose of political passion.”

In its Monday morning “headlines” email, the Post called her spiel a “wake-up call.” And the Post article itself, a chatty roundup from TV critic Hank Stuever, called it “sharp criticism of Donald Trump and the cultural forces that led to his victory.”

But really, all Stuever cited was Streep talking about something that didn’t happen:

Recalling a moment from the 2016 campaign when Trump appeared to mock a New York Times reporter’s physical disability, Streep likened it to an effective movie performance. “I still can’t get it out of my head,” she said, with genuine sadness.

Guess she set off Stuever’s Genuine Emotion Detector™. Unfortunately, the incident that gave Streep the genuine frowny face wasn’t itself genuine. But move on, there’s diversity to be celebrated and the just-us-folksiness of millionaire actors to extol.

Streep also championed the diversity of the gathered film and TV actors in the room, challenging the idea that they are isolated from “real” America. She then gave words of support to the “principled press” and urged her peers to support journalists who will be covering the new administration.

Maybe Streep could let us in on who this “principled press” is. They might be something The Washington Post could try to emulate.