Father’s Day is no longer just a recognition of male dads who have loved and sacrificed for their kids.

In the wake of 2015, the year of the transgenders, Father’s Day 2016 will celebrate the fraction of a percent of dads who decided they are women, sometimes leaving their families in order to “experiment.” Other modern dads are not even male. 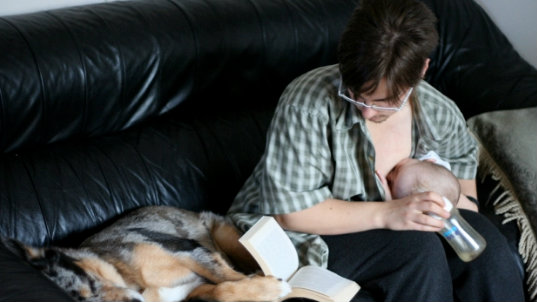 31-year-old Trevor MacDonald disowned her female identity before giving birth to her two kids. She had breast surgery and takes testosterone, but somehow is still able to breastfeed her babies a bit. MacDonald even authored “Where's the Mother?: Stories from a Transgender Dad” to show people what being a transgender parent is like: “not the simplistic ‘born in the wrong body’ line that we hear so often in the media, but the complexities, the nuances, and the mixed feelings.”

“The stories of real-life trans parents are just as beautiful as the one told in [Amazon.com’s TV series] ‘Transparent,’” The Huffington Post’s Ryan Buxton cooed about MacDonald and several other transgender parents.

Dick Howey, dad of Noelle Howey, decided to live as a woman named Christine through a transition that ended in 1990, before it was cool to be transgender. Yahoo News published a piece by his daughter praising his new lifestyle.

In April the father of a six-year-old started transitioning with the help of his wife. In a video his wife asked her daughter how Daddy’s transition made her feel. “Good!” she says several times. Media outlets called the response “the sweetest reaction” and “adorable.”

Trisha Shattuck began living as a woman in the 1980s. The transition confused his kids, but they supported him in his decision, wrote one of them in People magazine.

Karen Hewitt is the dad of Joshua, who told a heartbreaking story in The Guardian about losing his dad in the transition, not knowing what it is to be a man, hating his body, and even not wanting a baby boy. Although he too ultimately supported his father’s choice as an alternative to suicide, he made it clear that it was extremely detrimental for him to lose his father in that way.

It seems “beautiful stories” are in the eye of the beholder.