Hollywood So Loves Obamas, It Makes Movie of Their First Date

There’s no love story like a presidential love story -- as long as it’s a liberal president. The Sundance Film Festival feature “Southside With You,” chronicling Barack and Michelle Obama’s first date released a trailer today ahead of its Aug. 19 debut this summer.

The film is the “inspiring true story” of the Obamas as forward-thinking 20-somethings who dream of making a meaningful impact on civil rights. Luckily for the movie, although it foreshadows Barack’s presidency many times, it steers clear of his two terms in office. The depressing reality of that would have been much less romantic than the ideals cherished by the characters. 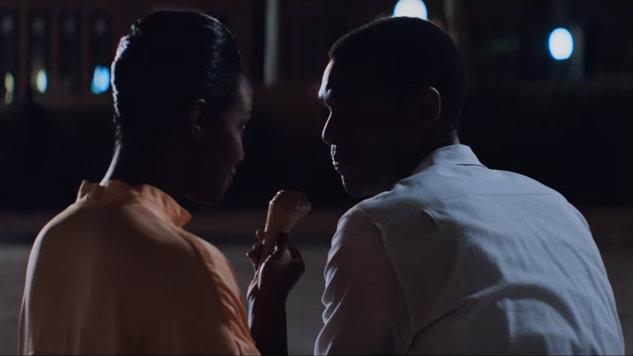 The trailer’s one-liners are too cheesy to take seriously. A young Obama tells Michelle he came to Chicago “to try to make a difference.” His date has similar goals, she says. “Thought I would too. Maybe I’d help women, empower them.”

“You and I share a lot of the same interests,” Barack responds.

“Southside With You” was produced by John Legend and is the first film of writer and director Richard Tanne. It was featured in January at the Sundance Film Festival where it enjoyed good reviews.

Tanne commented that he heard from reliable sources that the Obamas were excited about the film as well as “a little baffled by its existence.” Tanne said the officially fictional account is mostly accurate and that he got various details from public information about the anecdote.

The film follows a 28-year-old Barack working as a legal intern in the summer of 1989 and his senior associate Michelle as they talk about their noble aspirations, explore Chicago’s South Side, stop by the Art Institute, attend a screening of “Do the Right Thing,” and stop at an ice cream shop where they first kiss.

The movie even includes an “inspirational speech that had everybody in awe” at one of Obama’s community organizing meetings.

The future president concludes his dream is to “hold a position of influence in civil rights” perhaps in politics.

Stars Parker Sawyers and Tika Sumpter said at the Variety Fandango Studio that although the movie embodies the essence of Obamas, it respectfully does not intend to impersonate them.

Sumpter remarked, “I think we made it a point when [director Richard Tanne] and I decided to do the project, we did not want to do impersonations. … We wanted to embody their essence of who they are.”

Sawyers said he was aware the movie might be frowned upon by critics of Obama’s presidency. “If people want to hate-watch it, I don’t mind,” he said. “Go buy the ticket!”

Various news outlets promoted the film and indirectly the Obamas in their commentary, including The Root, The Guardian, The New York Times, and Variety.

“Whether taken as storytelling, propaganda or an artful hybrid of both, it’s a movie that unabashedly wraps its real-life subjects in a humanizing embrace,” read Variety’s review. “And to the degree that one can separate aesthetics from politics, it’s hard not to come away from the film without an essential respect for the restraint and quiet daring of Tanne’s approach.”

Responses on Twitter were mixed, with many viewers calling the movie cute and others commenting that it should leave out President Obama’s failed time in office.

Of course, the facts and failures of Obama’s presidency largely contradict the idealistic aspirations of the young Obamas in the film. Perhaps a movie that does not include his presidency is the most enjoyable after all.