Mic.com has a penchant for misinterpreting the news. A Monday article accused conservative lawyer Anita Staver of threatening to use a gun to deter transgenders who enter the Target ladies’ room.

Target’s new policy to allow transgenders to use the bathroom of their choice in stores has spurred controversy, including a boycott petition by the American Family Association (AFA) garnering almost one million signatures.

Staver tweeted on Friday that she would bring a pistol into the Target ladies room if she needed to use it. She is a lawyer for Liberty Counsel, which represented Kentucky County Clerk Kim Davis, who refused on religious grounds to issue marriage licenses to gay couples.

I'm taking a Glock .45 to the ladies room. It identifies as my bodyguard. #BoycottTarget @Target

For the anti-gun folks freaking out about my #BoycottTarget tweet: I can't remember the last time I was in a public restroom without a gun.

“I want protection from the perverts who will use the law to gain access to women,” she tweeted later. The store’s new bathroom policy, she argued, will encourage men “to claim they are women when their real purpose is to assault women.”

Already a 26-year-old man with a gun was arrested on Saturday for filming women in a Target dressing room.

Yet Mic.com’s Mathew Rodriguez wasted no time in construing Staver’s statement as a threat of violence against transgenders.

Rodriguez wrote that Staver will “pack a pistol with her when she goes into a Target restroom, in case she meets a trans woman.”

The radicals go nuts when we mention self defense. Let's give them something to talk about. #2ndAmendment #gunsense pic.twitter.com/UDPsd5PuFA

Rodriguez mentioned a statement by Staver’s husband, also a Liberty Counsel lawyer, that the policy could “put individuals at risk and ultimately result in significant damage and even death of some individuals.” There are zero recorded instances of transgenders assaulting women in bathrooms, he said.

However, Matt Staver was referring not to transgenders but those who would abuse the law to harass women.

Contrary to what the LGBT crowd would have people believe, there are many recorded instances of abuse by cross-dressers in restrooms. In 2012 a cross-dressing man waited in a women’s restroom to attack women who entered. In 2013 a man dressed as a woman filmed women in a Macy’s restroom. 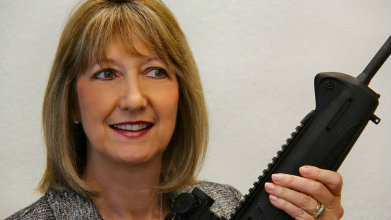 The American Family Association (AFA) wrote in a statement: “A man can simply say he ‘feels like a woman today’ and enter the women's restroom ... even if young girls or women are already in there.”

“Target's policy is exactly how sexual predators get access to their victims. And with Target publicly boasting that men can enter women’s bathrooms, where do you think predators are going to go?” says the petition.

The AFA suggested unisex bathrooms for transgenders who are uncomfortable in the bathroom corresponding to their birth gender.

“Bodyguards and guns are for protection, not aggression,” wrote Staver in a Twitter response.

Mic.com, the Huffington Post, and others in the media reject the common sense of keeping biological men out of women’s restrooms and leap to criticize those who disagree. Some like Mic.com, however, stoop to distorting the news to make their point.