Although demonstrators have been sparking police action by throwing rocks and bottles, blocking major interstates, and disrupting everyday life in cities across the country, the lefty media narrative last week was all about the “peaceful” protesters and the evil cops that kept arresting them. Now, three Baton Rouge police officers have been killed.

Numerous media outlets stressed how “peaceful” the Black Lives Matter (BLM) protests, particularly in Baton Rouge, have been. The New York Times praised Baton Rouge for being “passionate, and peaceful, after the shooting of Alton Sterling.” And when protesters did become “hostile,” it was because they were provoked by the police, according to CBS This Morning. Because police should know that it’s wrong to try to enforce the laws when it comes to BLM protesters. 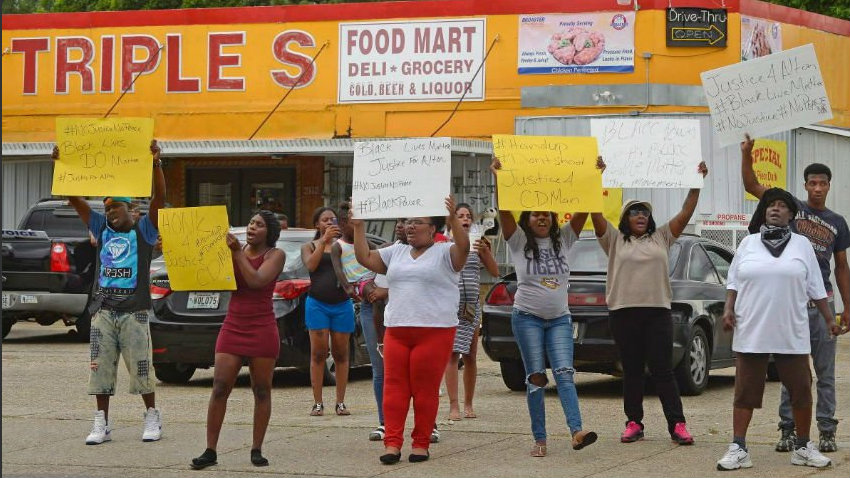 Katie Couric continued this cops vs. protesters narrative by repeatedly citing the number of protesters arrested by police while interviewing BLM leader DeRay Mckesson. But she conveniently ignored the 21 police officers who had been injured during protests up to that point.

When the Baton Rouge police reported that rocks and other materials were thrown at them during the protests, The Huffington Post was quick to point out that “there is no video of such action.” But “despite these non-violent protests, around 200 people have been arrested.” HuffPo doesn’t believe that police officers have enough to worry about without arresting people just for fun.

And then there was the “iconic” photo that the remarkable Huffington Post, alongside the New York Daily News, The Atlantic, and The Washington Post, used to compare American cops to the communist Chinese government in the famous “Tank Man” picture. BuzzFeed compared the same BLM picture to a similar one taken in Canada, with an Indian woman kneeling in front of a line of Canadian Mounties. In Katie Couric style, BuzzFeed ignored the fact that the officers were present because the protesters had lit numerous police cars on fire.

New Orleans’ The Times-Picayune published a story last week condemning the Baton Rouge police department for its “history of brutality complaints” prior to Alton Sterling’s death. Keeping in line with the media narrative, the paper wrote that the “Baton Rouge Police Department – like so many other departments across the country – is notorious for its brutal treatment of black people.” So there, any violence that the protestors do engage in is justified.

The point, of course, has been to paint BLM as an always peaceful, Kumbayah-singing movement and cops as those who hunt black people in their free time. This agenda ignores the fact that there are bad apples on both sides. In the wake of yesterday’s shooting, this is dangerous.

With the media focusing only on how “peaceful” these demonstrations are, it’s no wonder that ThinkProgress LGBT editor Zack Ford wrote that “some are taking justice into their own hands.”

Even though three Baton Rouge officers are now dead, the media won’t have to own up to its one-sided anti-cop narrative. It's RNC convention week. How convenient.