Amber Rose: ‘Half of Republican Men Are Gay’

Half of the Republican Party is gay! Who knew?

Amber Rose is the latest loose-lipped Lefty to get her own airspace on VH1, following the announcement of Marc Lamont Hill’s upcoming late-night show. Though technically a model and fashion designer, Rose is best known for being Kanye West’s ex-girlfriend. In preparation for the debut of The Amber Rose Show on July 8th, The Daily Beast interviewed Rose to get a taste of what viewers might expect from the show. 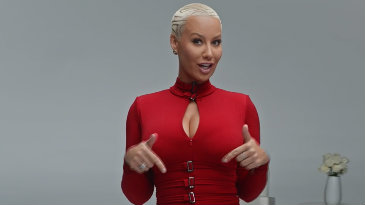 Interviewer Marlow Stern exposed his own bias by saying that “the Orlando mass murder…exposed the hypocrisy of a lot of politicians—particularly on the right—who are against gay rights yet mourned the tragedy.”

Amber Rose agreed, by claiming that hypocrisy among Republicans is even worse than Hollywood realizes. According to Rose, “half of the Republican men are gay anyway and then they vote against gay marriage and go out and fuck their boyfriends while their wife is at home taking care of their kids.”

This is obvious because “we’ve seen that [happen] quite a few times.” As usual for logic-less liberals, a handful of instances must mean that the entire party is guilty.

This motto led her to start SlutWalk. The annual event is designed to fight against “derogatory labels, victim blaming, gender inequality” and seeks to empower “marginalized” groups such as “transgender people and sex workers.” Rose herself started stripping when she was 15, and defends that as “hard work and an honest living.”

Rose is, of course, a proud Hillary supporter, and has “faith” that “if our country can vote for President Obama twice, they know better than to vote for Trump.” Earlier this year, she joined the list of celebs who threatened to leave the U.S. if Trump becomes the next president.