She’s 84 years old and she’s a left-wing rock star. Justice Ruth Bader Ginsburg (lately “Notorious RBG” to fans of liberal judicial activism) can be relied on to come down on the progressive side of nearly every issue that reaches the Supreme Court, including so-called “abortion rights.” 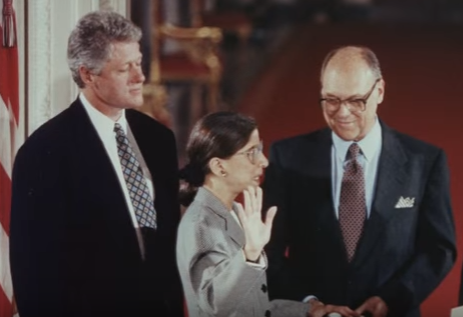 So it makes sense that Participant Media, which produced Al Gore’s An Inconvenient Truth and is dedicated to compelling “social change,” is producing a biopic about her. Felicity Jones will star as Ginsburg in On the Basis of Sex, a film about the justice’s life. (Meanwhile, Clarence Thomas can’t even get a mention in the Smithsonian’s National Museum of African American History, but that’s another story.)

While the film will supposedly focus on Ginsburg’s efforts to end gender discrimination (as its name signifies), you have to wonder whether her pro-abortion extremism, which the jurist seems to view as fundamental to gender equality, will be highlighted.

Ginsberg voted against upholding restrictions on partial-birth abortion in Gonzales v. Carhart and deemed a partial-birth abortion ban unconstitutional in Stenberg V. Carhart. A long-time proponent of unrestricted access to abortion, Ginsburg has claimed holding abortion clinics to the same professional and sanitary standards as other healthcare providers represents an “undue burden” on women (never mind that unregulated abortion clinics have proved unhealthy for women and -- obviously -- the unborn).

One thing we can be sure of is that the film won’t highlight Ginsburg’s hypocrisy when it comes to “judicial activism.” Hint: it’s “activist” when the court overturn liberal legislation. When it makes up new “constitutional” rights, not so much.

But honesty and historical accuracy aren’t really in Participant Media’s wheelhouse. The studio makes lefty propaganda films, including 99%: The Occupy Wall Street Collaborative Film, An Inconvenient Truth, An Inconvenient Sequel, Jimmy Carter Man from Plains, and Misconception. And according to The Hollywood Reporter, On the Basis of Sex will be in safe progressive hands, directed by Mimi Leder (The West Wing).