On July 11, Chelsea Handler tweeted out the following: 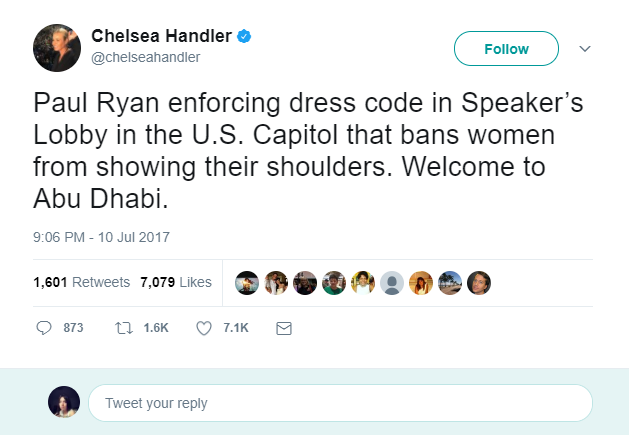 Her tweet came after “political experts” Refinery29, Marie Claire, Vogue, and Vanity Fair expressed their outrage towards the dress code and purported speaker Paul Ryan had conspired with other alleged chauvinists in Congress to create a purposefully sexist dress code.

Aside from forgetting Abu Dhabi is one of the most Westernized cities in the Middle East, Handler clearly didn’t realize that Congress’ tradition in professional attire applies to men, as well as women. According to CBS, “Men are expected to wear suit jackets and ties in the House chamber and Speaker’s Lobby.” Women, similarly, are not permitted to wear sleeveless garments and open-toed shoes. The “dress code” isn’t enforced – it’s simply tradition.

According to their logic, Refinery29, Vogue, Marie Claire and Vanity Fair writers should be just as enraged at many liberal women's colleges and universities, including Bryn Mawr College – where, during most labs, students and professors are required to wear traditional lab coats and closed-toe shoes. Habits of dress similar to “Paul Ryan’s Congress” exist for British Parliamentary debates, and the Canadian House of Commons actually details more specific dress requirements for men than women.