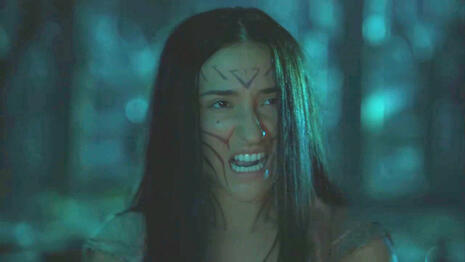 Good news, HBO’s Lovecraft Country has taken a slight break from hating white people and adding modern politics to 1955. The bad news is it spends all those thirty seconds showing us a naked intersex, or "two-spirit," character. Somehow, that isn’t much better than what we’ve been getting.

The September 6 episode “A History of Violence” has Tic (Jonathan Majors) searching through the depths of a museum to find the secrets of an ancient cult. With the help of his father Montrose (Michael K. Williams) and his friend Leti (Jurnee Smollett), he survives several Indiana Jones-style traps to reach a secret chamber housing the cult leader’s deepest secrets. To their shock and horror, the corpse of a dead Native American woman reanimates before their eyes to reveal the truth.

Of course, in the midst of reanimating, she’s completely nude. However, unlike most zombies, she has both breasts and male genitalia. For some reason, the show thinks that means we should have to see them for nearly thirty seconds straight. She explains that she’s two-spirit, despite the term being a more recent gender identity, and is both man and woman. If I don’t like seeing dozens of images of male parts, then I’m not going to support seeing them below a pair of breasts.

Her character is hardly worth her appearance in the first place. She simply reveals that the white cult leader was a colonizer who killed her because white man bad. Then, she’s killed by Montrose in an effort to keep some other mystery a secret. All this becomes is an excuse to show nudity without diverging too much from their racist hatred. If Portland has shown us anything, it’s that we could all use a little less of that.