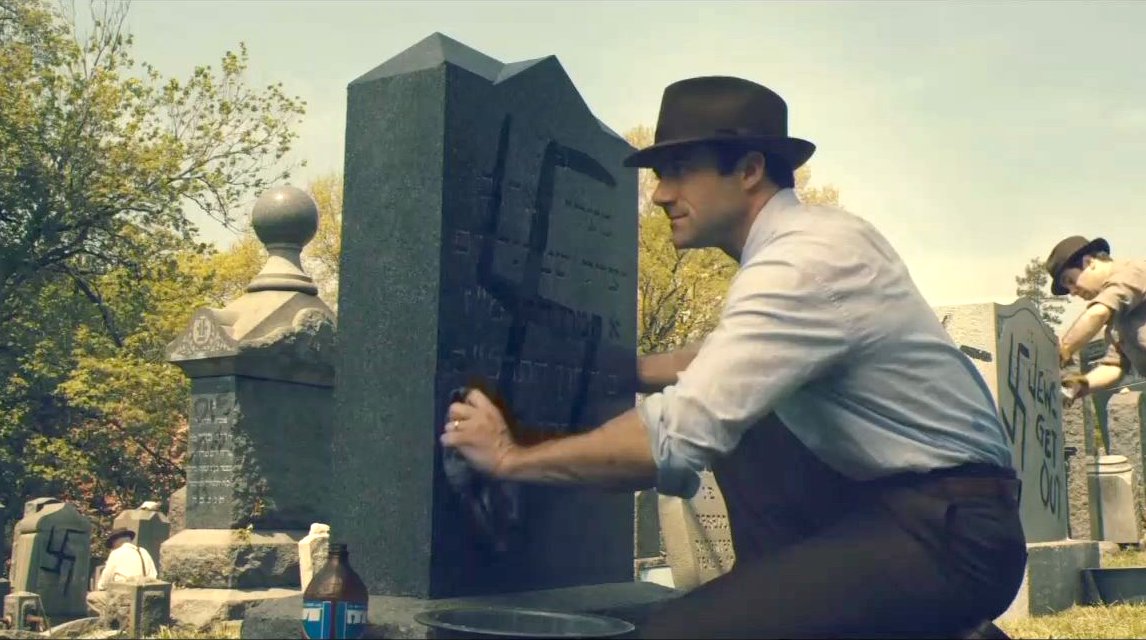 When liberals aren’t shoveling out fake news to push their agenda, they’re usually shoveling out fake history to push their agenda. Take HBO’s  The Plot Against America, for example. The latest episode paints an America that was always anti-Semitic, only to be publicly revealed by a populist president. And somehow, this turns into yet another Donald Trump drag by the media.

The March 30 episode “Part 3” follows the aftermath of popular aviator Charles Lindbergh (Ben Cole) surprisingly winning the 1940 presidential election against Franklin Roosevelt. Despite this, his Nazi sympathies and isolationist attitudes draw ire from many Jewish citizens, most specifically Herman Levin (Morgan Spector). Now that Lindbergh is president, his anger gets worse as the country quite suddenly turns anti-Jewish in a matter of months.

Just six months after the election, we find Herman and other Newark citizens scrubbing graffiti and swastikas off Jewish graves. Apparently, this is already a regular occurrence in May 1941 since Herman comments, “You'd think with all the vandalism in the last few months, police might put a man on.” Alas, things don’t seem to be getting any better. However, if you’d believe Herman’s brother, Monty (David Krumholtz), these “America Firsters” were always here, only emboldened by their new president.

Herman: I stopped by to tell you...they didn't mess with Jack's stone. Oh, you didn't hear?

Herman: The goons came back to Orange Avenue last night, ran through the cemetery. They left swastikas and curses on whatever they couldn't knock over.

Monty: Again, fucking Lindbergh... And his goddamn America Firsters. These assholes... You know, they've always been here, but now, it's like they have permission to crawl out from under the rocks.

Herman: I'm glad we're on the same page with that.

Sadly, the anti-Semitic attacks only seem to spiral from that point. Lindbergh’s administration soon opens a program to essentially relocate Jewish children. The Levins face public scrutiny when bigots openly call Herman a “loud-mouthed” Jew. It’s so bad that Herman’s wife, Bess (Zoe Kazan), starts looking to move to Canada. Seems like that reaction to a president never changes.

It’s one thing to try and draw parallels to Lindbergh and Trump both being populist celebrity candidates. It’s another to try and draw parallels between things that never happened. The show clearly wants to warn about a bigoted uprising, yet there is no present-day equivalent. Despite what liberals would have you believe, there was no hate crime wave after the 2016 election, and Trump did not give “permission” for bigots to run wild. Perhaps America is prejudiced in this fictionalized history, but that is certainly not what we have now.

Nevertheless, the Trump comparisons are still coming in full force from the liberal media. CinemaBlend calls the show “effective and relevant.” The Guardian gets more direct describing, “The Trump parallels come early and often, and while the writing occasionally prints its subtext in font a couple of sizes too large, it’s all in order to make the point that much more forcefully.” The parallels may not have been what the 2004 novel had in mind, but that’s clearly not stopping the left from making them. I only wish they would keep America itself out of it.