AMC’s second season of The Terror, titled The Terror: Infamy, follows a supernatural entity stalking a community within Japanese internment camps during World War II. The “terror” therefore refers to both the evil spirit wreaking havoc on people as well as the evils of war, prejudice, and government imprisonment that actually existed during the time. Rest assured that even if the show doesn’t use that history to make “timely” comparisons to today’s border crisis, the liberal critics will. 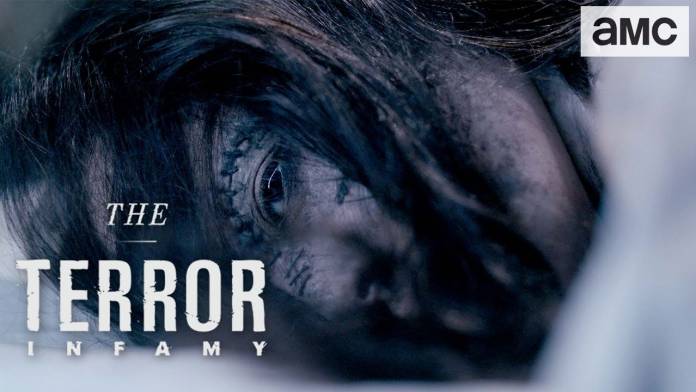 The August 12 premiere “A Sparrow in a Swallow’s Nest” mostly introduces us to a Southern Californian community prior to and following the Pearl Harbor attack in 1941. We meet Chester Nakayama (Derek Mio) struggling with his still illegal mixed race relationship with Luz Ojeda (Cristina Rodlo) as well as his conflict with his Japanese immigrant parents Henry (Shingo Usami) and Asako (Naoko Mori). Henry also faces his own hardships by being accused of being a “spy” by his employers. In the midst of these scenes, an unseen force haunts and kills people in the Japanese neighborhood, seemingly by random.

Finally, we see Chester’s parents rounded up from their houses to be taken to internment camps after the bombing of Pearl Harbor. Chester watches in horror and confusion as Henry warns him “You're a citizen, boy. You were born here. Show them you're a patriot. Fight for your country.”

While these scenes reflect an awful period of America’s past, are they really supposed to compare to the border today? According to George Takei, who also stars in this series, they most certainly do. In an interview with TV Guide, Takei links the present and the past by saying "What we have is this endless cycle of repetition of this kind of horror and injustice being inflicted on minority people, and we see it again today on our southern borders. We've reached a new, grotesque low.”

Of course, liberal critics followed suit in their reviews for the series, even when there’s admittedly no comparison. The Los Angeles Times remarks “America’s family separation crisis has deepened since filming began in January, and U.S. policies and rhetoric targeting non-white and foreign-born people already alarmingly extend the nation’s racist history.” NBC writes “The show is premiering at a relevant time in the United States: In June, the Trump administration announced plans to use Fort Sill, an Army base in Oklahoma and former internment camp for Japanese Americans, as a temporary housing facility for migrant children.” The Hollywood Reporter does the biggest reach by admitting “It's not like Infamy is anti-ICE/anti-Trump propaganda,” but “splitting up families, imposing loyalty oaths, confiscating properties and putting citizens in camps surrounded by barbed wire was and is bad.”

In reality, their outrage is about as fake as the ghosts. The detention facilities are nowhere near comparable to the interment camps. Furthermore, the detaining of people illegally crossing the border is not the same thing as detaining legal U.S. citizens for only having Japanese heritage. The series itself may recognize this, but unfortunately, extreme leftists never learn.