It’s not everyday the media tell stories like this, but PBS just did: Rehana, a pregnant girl refugee, is refusing abortion despite her husband abandoning her.

On April 25, PBS NewsHour continued its coverage of the Rohingya “crisis,” which others say amounts to genocide. In the heartbreaking report, special correspondent Tania Rashid interviewed one young Rohingya refugee, Rehana, who was six months pregnant. Although her husband deserted her, she refused abortion “because I want my child to have a good life.”

According to ABC News, the U.S. State Department is investigating the reported horrors committed against the Rohingya after more than 7000,000 of the predominantly Muslim ethnic minority fled from their homes in Myanmar to Bangladesh.

While a previous show examined the “plight of hundreds of thousands of refugees trying to return home to Myanmar,” Wednesday night’s episode focused on the plight of young women and forced marriages.

“More than half of those refugees are female, and among that population, young women and girls are often forced into marriage to much older men,” said anchor Judy Woodruff.

For the full report, she turned to Rashid and videographer Phillip Caller in the Kutupalong refugee camp in Bangladesh.

“Child marriage is common among the Rohingya, but insecurity and poverty is pushing many families to marry off their daughters even earlier,” Rashid began. “Girls are often forced into marriage because their families can't afford to feed them and by marrying them off, they create new households to secure more food aid handouts.” 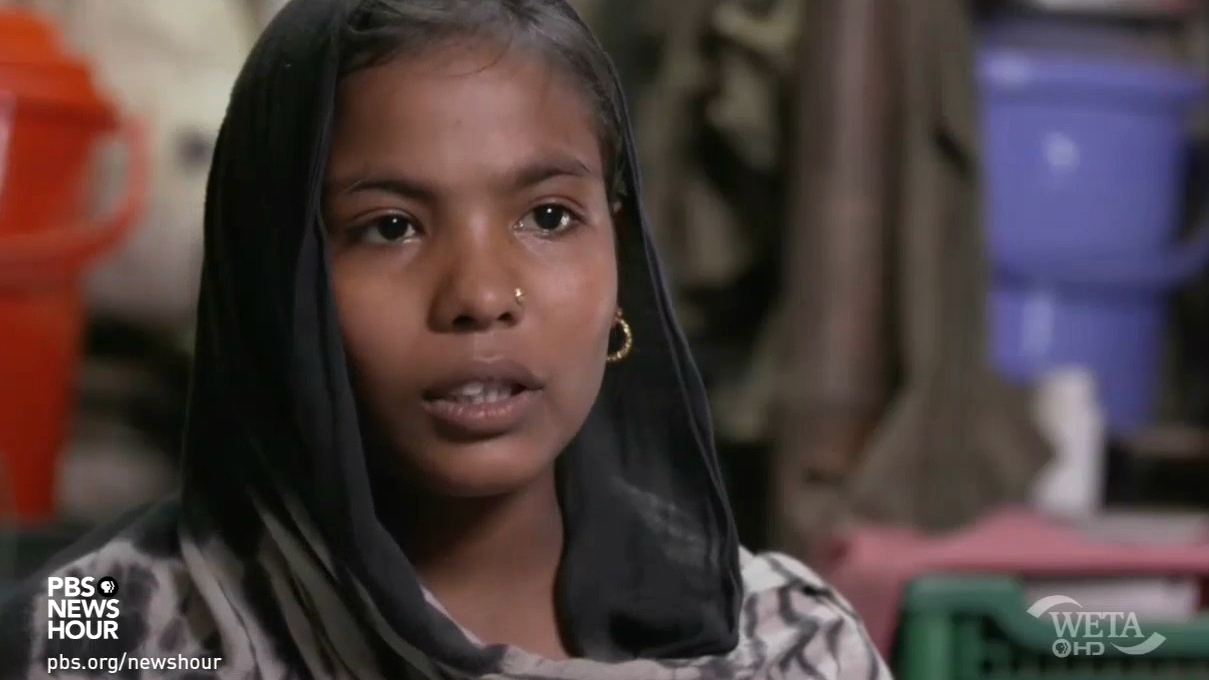 She interviewed one young woman, Rehana, who married a 30-year-old man at just 12-years-old.

While he “promised to support her and her four sisters after her father fell ill,” Rehana said her husband disappeared a “few weeks after the wedding.”

“One morning, he went to work as usual and didn't come back,” Rehana remembered. “He's been gone now for six months and hasn't contacted me once. I think he's gone back to his other wife.”

And, for those six months, Rehana has been pregnant.

“I'm always in pain, my whole body aches and I find it hard to move,” she said. But she refused to give up her unborn baby – no matter the cost.

“I chose not to have an abortion because I want my child to have a good life,” she said. “I'll beg for money if I have to.”

Her husband wasn’t truthful about his identity, she stressed.

“My husband lied to me,” she said. “He said he was from Myanmar, but actually he was from Bangladesh and was already married to another woman with two kids.”

According to Rashid, marriage between Bangladeshi men and Rohingya refugee women is illegal, but “there is little enforcement in the camps.”

As a spokeswoman for Faith Coalition to Stop the Genocide in Burma, Nicolee Ambrose commented on the story.

“Stories like this show that we must do something to help these girls," she told MRC. "When I visited the camps in Bangladesh, a sweet 13-year-old girl in a princess dress told me she had been raped repeatedly alongside her mother, by over 10 men. Women and children are taken advantage of, but they stay strong."