Moms no longer need to turn around the cover of Cosmopolitan as they check out at Walmart with their kids. The magazine with its signature cover filled with sex tips and shocking headlines has been removed. 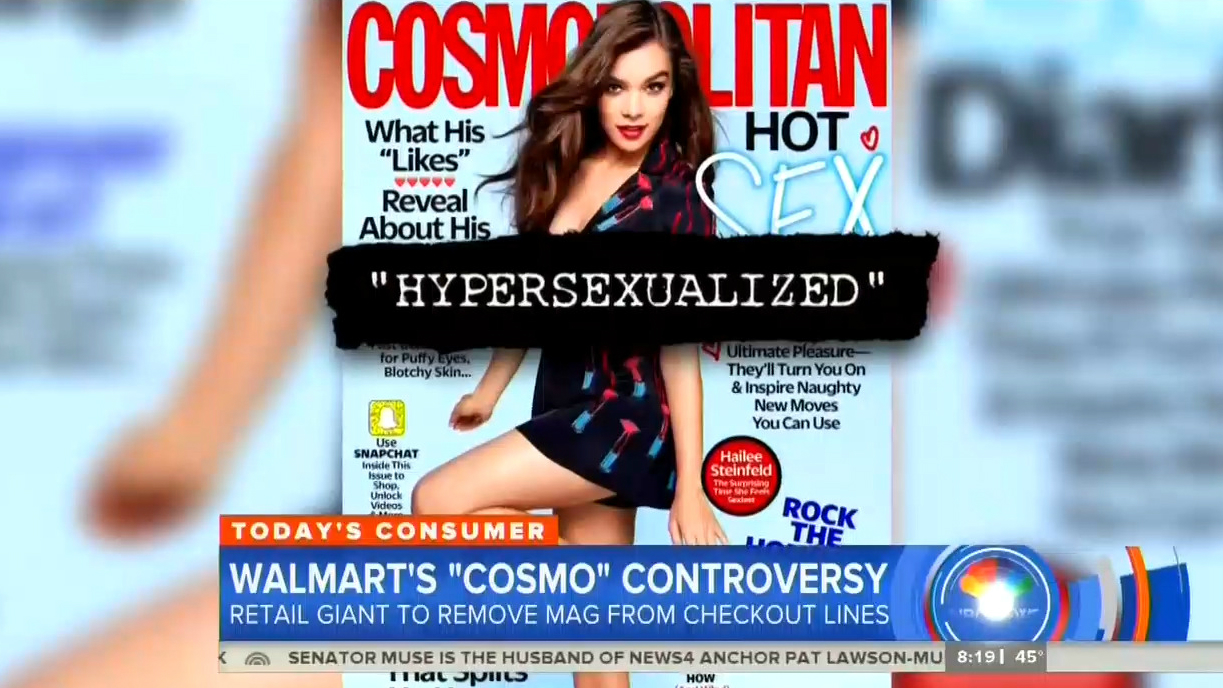 On Tuesday, the National Center for Sexual Exploitation (NCOSE) announced Walmart’s decision to pull Cosmopolitan magazine from its checkout aisles and place it in the magazine section, where consumers would have to purposefully search for it. In the wake of the #MeToo movement, Walmart took note of NCOSE’s concerns about Cosmo’s contribution to the “sexual exploitation” of women – and so did two of the three broadcast networks.

In reaction, NCOSE released a statement on what Walmart’s move meant:

In her own reporting, Ling Kent refrained from reading the “racy headlines” that she said caused part of the problem. Instead, she merely said “like this” and pointed to a Cosmo cover with the headline “Heat Up Sex!” including “sizzling forefplay tips” and “warm toys for your hot spots.”

But she concluded that the “big question this morning” wasn’t about the objectification of women but “Will losing that prime real estate offered at the checkout lanes at Walmart impact Cosmo sales?”

She credited NCOSE for Walmart’s decision and interviewed NCOSE Vice President of Advocacy and Outreach Haley Halverson for a moment about the dangers of Cosmo.

“It's filled with extremely explicit articles detailing sex acts and encouraging its young viewership to do things like sext, watch pornography and engage in other risky behaviors,” Halverson said.

But she didn’t stop there. Ling Kent also interviewed three “loyal readers [who] say reducing the visibility of the magazine undermines its influence on women’s liberation.”

“The retail giant will pull the women's magazine from checkout lines at 5,000 stores nationwide,” she added, before also referencing NCOSE.

Co-anchor Gayle King, chimed in about Cosmo’s “big following.” On its website, the Hearst-owned magazine claims to reach 18 million readers per month.

ABC’s Good Morning America said nothing of the story.

NCOSE’s work has a lot of support. According to the organisation, “Nationally representative surveys show that the majority of Americans believe that Cosmopolitan’s graphic headlines are not appropriate for all ages.”

In another statement, Executive Director Dawn Hawkins explained why the move was a win for women.

“Walmart’s removal of Cosmo from checkout lines is an incremental but significant step toward creating a culture where women and girls are valued as whole persons, rather than as sexual objects,” she said. “We are grateful for Walmart’s cooperation and for Walmart leadership’s recognition that corporations must do their part to change #MeToo culture.”