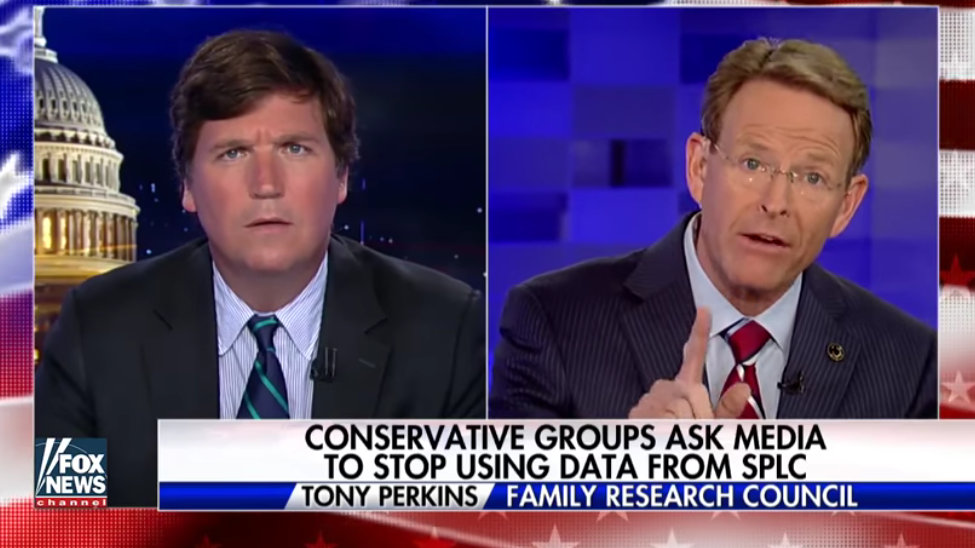 On Wednesday, Fox News host Tucker Carlson invited Tony Perkins, president of the Family Research Council, to discuss why he and several other conservative leaders are urging news outlets to immediately halt their use of Southern Poverty Law Center (SPLC) data in their reporting.

The SPLC is a “progressive activist group like hundreds of others,” Carlson began, “but for some reason, the media have anointed them the national arbiters of what is or what is not a hate group.”

“Which is a shame,” he added, “since they are totally fake and dishonest.”

He isn’t alone in that sentiment. Composed by the Family Research Council and signed by Media Research Center President Brent Bozell, 47 leaders and organizations published an open letter to the media on Wednesday warning that the SPLC’s map of “hate” groups endangers many traditionally conservative and faith-based groups.

Perkins outlined the reasoning behind the letter.

“We’re putting the media on notice,” he said, “that they’re endangering the lives of people, by putting up this information from the Southern Poverty Law Center, which has no basis in fact or truth.”

His own organization, located on the SPLC map, became the target of a gunman, Floyd Lee Corkins II five years ago.

Corkins shot the building manager and “intended to kill everyone in the building, and then go on to terrorize additional organizations,” the letter by conservative leaders read. “The U.S. Attorney stated in federal court that Corkins targeted FRC and additional targets by using the SPLC website’s ‘Hate Map.’”

According to Perkins, the SPLC first caused worry among Christian groups during the Obama Administration.

With that change, Carlson found the media’s repetitive use of SPLC data mystifying:

You would think that any normal reporter, no matter how liberal, would be looking through the list of hate groups, so-called hate groups, and say, ‘You know, okay, you know, some of them are clearly hateful and crazy,’ then they get to the Family Research Council and you say, ‘you know, I may not agree with their agenda, but, like, they’re not a hate group.’ Does nobody at say, CNN or The Washington Post, ever think like, ‘This is overreach. That’s not a hate group. It’s a Christian group.

Perkins pointed to a “bigger agenda behind this” and cited former SPLC spokesman Mark Potok admitting the center doesn’t have objective criteria for its "hate" groups.

That quote summed up the SPLC, Perkins stressed.

“This is, again, the left’s pit bull going after those who oppose the left’s agenda,” he urged. “That’s what this is about, and the media needs to be put on record, knowing that that’s what’s behind the SPLC.”

While conservative media have responded to the letter by conservative leaders, Perkins admitted that the other news outlets have not.

“But, here’s the thing, Tucker, they now know they have no excuse when there’s another attack like we saw against Republicans, the Republican congressman, or the attack on the FRC five years ago,” Perkins concluded. “The media has become complicit in this violence sponsored by, inspired by, I should say, the Southern Poverty Law Center.”