Ex-Planned Parenthood Director: We ‘Sold’ Aborted Babies for $200 Each

One former Planned Parenthood employee is hoping to expose America’s largest abortion provider from the inside out. And the devil’s in the details.

I will be on Tucker Carlson tonight around 7:30pm CST. Just letting you know.

“I was there for 8 years,” Johnson told Carlson of her time at Planned Parenthood. Among her other duties, she said, she checked that her Texas clinic performed a certain number of abortions each month.

The reason came down to one thing: money. Video below.

“Every abortion facility within Planned Parenthood has a monthly abortion quota that they must meet,” she explained. “That’s how they make their money. About 50% of their income is just cash from abortion services and so in order to keep their clinics open, they have to sell so many abortions.”

According to Johnson, abortion was Planned Parenthood’s primary focus.

“They don’t do a lot of the things that they say that they do,” she added, including mammograms and prenatal care.

Even Planned Parenthood’s dealing with birth control, she said, contributed to more abortions. She stressed:

They provide birth control because, according to their own numbers, 54% of women who have abortions were using birth control at the time that they got pregnant. So they know that that’s just a way to get these young girls, especially – I mean, I’m 37 years old, I could never remember to take a pill at the same time every day – so, you know, get these young girls in there, put them on a pill or a method with a high human error rate and eventually they’re going to end up pregnant and that's another way to sell them an abortion.

During the segment, Carlson brought up the scandal that fueled the political push to defund Planned Parenthood: the harvesting of aborted baby parts exposed in undercover videos.

“They also sell fetal tissue, baby parts, and you saw that happen,” Carlson inserted about Planned Parenthood. “What are the economics of that?”

“At the affiliate where I worked, we sold the whole body for about $200 per fetus” to the company Amphioxus, she said. As an employee of Planned Parenthood’s Houston affiliate, the “largest abortion facility in the Western Hemisphere,” Johnson continued, “We had capacity to perform about 75 abortions every day, six days a week.”

That translated into millions of dollars and who knows how many lives. 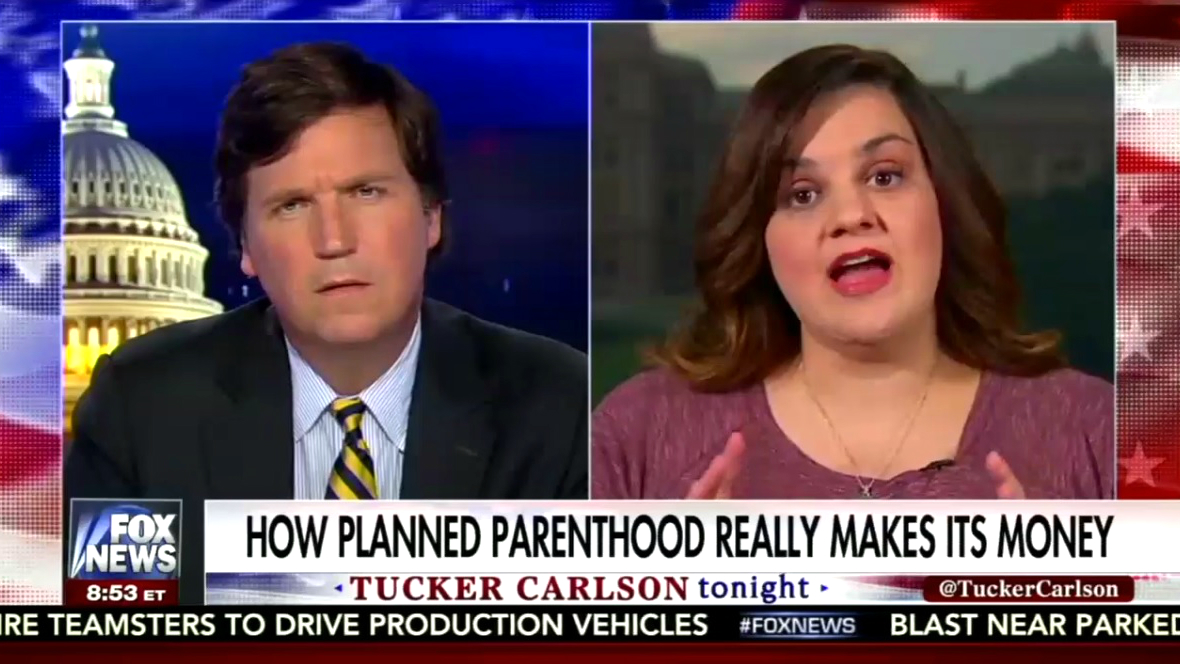 “Even half of those, women, you know, having tissue that is suitable to be donated, ‘donated’ [she added with finger-quote marks] or sold, then you know, you’re looking at over two million dollars a year just at that one clinic.”

When Carlson pointed out that clinics are “not allowed to sell human parts” in compliance with federal law, Johnson responded that “if you line item it correctly,” then clinics can go “skirting around the law.”

“Because the law says that they can charge for things like shipping and handling, and, you know, things like that,” Johnson stressed. “And so if they line item it correctly, then it looks like that you’re just paying for handling services or for shipping services, but really, there is no additional handling involved, there is no additional shipping involved.”

That’s because, she added, “Amphioxus came and picked up the parts from our facility.”

“You become very dark and you stop seeing just the heinous acts that you are participating in and it becomes a joke,” she said. She pointed to the security code on her clinic’s alarm, which spelled out “baby” with the numbers 2, 2, 2, 9 and the freezer where they stored baby parts that they “jokingly” referred to as the “nursery.”

Johnson now heads the pro-life group And Then There Were None, which helps clinic workers to leave the abortion industry and transition into a different career.

According to Planned Parenthood’s most recently published annual report, the organization performed 328,348 abortions and received $554.6 million in “government health services grants and reimbursements” for the year 2015 – 2016. Full interview below.