Funding America’s largest abortion provider will reduce abortions, according to its president. Never mind that, as Planned Parenthood receives more funding, its own abortion rate increases.

On Wednesday, Planned Parenthood President Cecile Richards appeared as a guest on Morning Joe to discuss the GOP healthcare bill that proposes to halt federal funding (Medicaid money) from going towards her organization.

During the interview, Richards took every opportunity to advertise her organization. 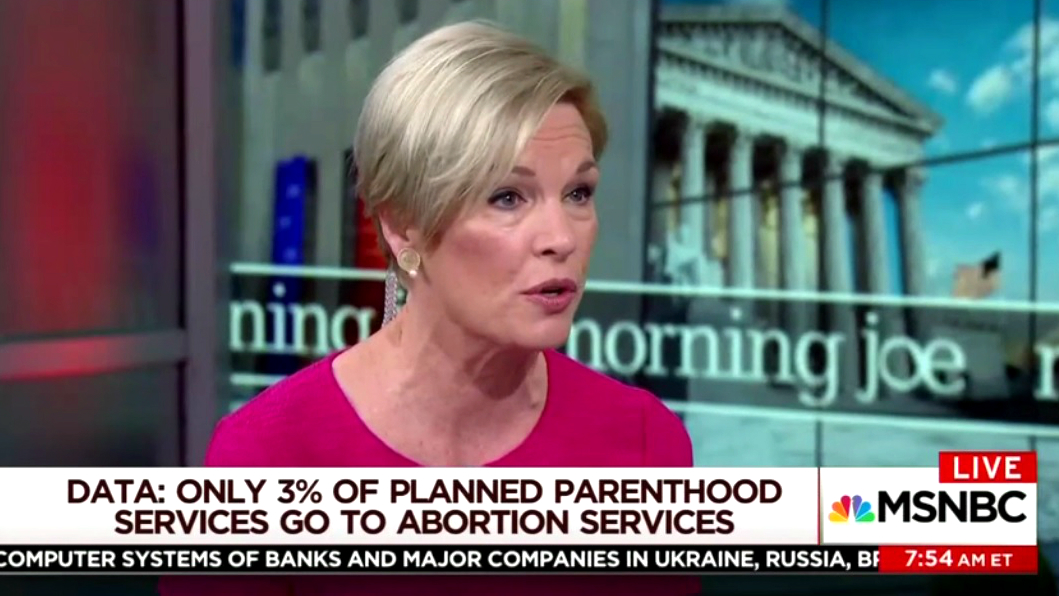 “We're actually now at an historic low for teen pregnancy in the United States of America,” she touted. “We're actually at the lowest rate of abortion since Roe vs. Wade was decided.”

As with abortion, Planned Parenthood saw a rise in government funding. It received $554.6 million in “government health services, reimbursements & grants” from 2015 to 2016 versus $553.7 million the year before.

Referencing the Congressional Budget Office and “every other medical journal,” Richards warned that blocking funds for Planned Parenthood would translate into more unintended pregnancies.

“[I]f you actually block access to Planned Parenthood, unintended pregnancy will go up, as will the rate of abortion,” she warned, “which just seems crazy to us.”

She’s right. More abortions are “crazy.” Not to mention one abortion. That’s why the pro-life movement is so adamantly against taxpayer funding for Planned Parenthood.

Republicans, she continued, were “making a big mistake” placing “politics ahead of women's healthcare.” (As if Planned Parenthood isn’t political. Its action arm just dumped hundreds of thousands in the recent Georgia special election, never mind the presidential election.)

“He said more recently that, if you stop performing at abortions at Planned Parenthood, you could keep all your federal funding,” Geist pointed out. “Is that something you ever would consider?”

“No, I think it’s really important, Willie,” Richards said before later adding, “It doesn’t make any sense. It’s a legal right women have.”

“The thing I don't really understand and I would challenge any member of the United States Senate or Congress is,” she said, “if you really want to reduce the unintended pregnancy rate and the need for abortion, you should be funding groups like Planned Parenthood that actually every single day do more than all this political wrangling do to provide women basic access to healthcare, detect cancer early, you know, give – give birth control to folks who need it to prevent an unintended pregnancy.”

To top it off, the chyron on the screen read, “Data: Only 3% of Planned Parenthood Services Go to Abortion Services.” Po-life groups, such as Students for Life of America and Live Action, have long debunked that statistic. Even the liberal Washington Post called the number deceptive.

While the Hyde Amendment, a legislative provision approved annually by Congress, bars federal funding (aka taxpayer funding) for abortion except in cases of rape, incest or to save the life of the mother, pro-life leaders argue that the government money is fungible. The argument that money is fungible, or that Planned Parenthood could offset costs with public funds to free up other resources for abortion, is a point frequently highlighted by pro-life groups.