It’s OK when the feminist media say it, but not when Kellyanne Conway says it: today’s feminism stands for abortion. 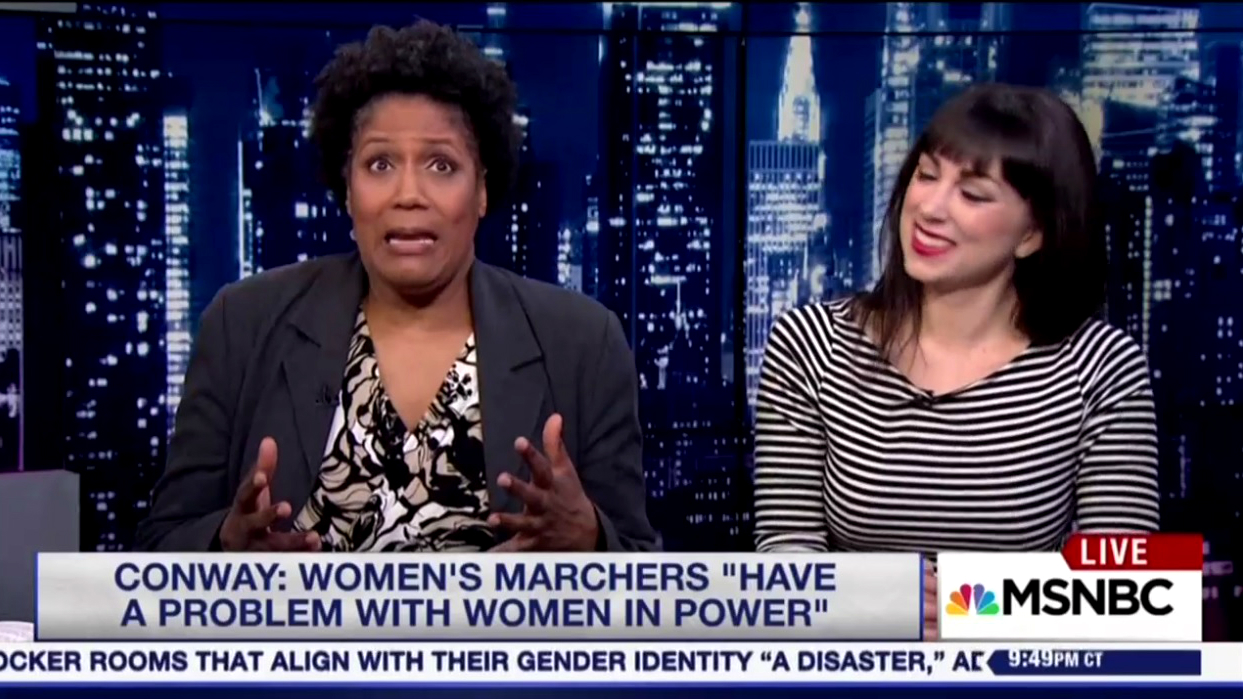 To begin the Conway-bashing segment, Melber played a clip of the White House counselor talking about feminism at CPAC last week.

“For me, it’s difficult for me to call myself a feminist in the classic sense because it seems to be very anti-male and it certainly is very pro-abortion in this context,” Conway said, “and I'm neither anti-male or pro-abortion.”

Greer was the first to make fun of Conway.

“What trip to Gravyville are we taking right now?” Greer reacted to what she called Conway’s “nonsense.” “Feminism is about equity, right? And so, when did this become being about not being for abortion?”

Funny she should ask.

Greer should have questioned her fellow panelist, Ryan, who tweeted the day before, “Feminists value access to birth control, the morning after pill, and abortion.” After all, in a November Daily Beast story headlined “Trump Is Proof: Feminism Isn’t Free,” Ryan wrote that “millennial women grew up taking certain fruits of previous waves of feminism for granted” including “the right to choose.” (Never mind her theory on “What’s the Best Age to Have an Abortion?” Spoiler alert: it’s 25.)

She could have asked the feminist media, like Guardian columnist Jessa Valenti who announced that partnering with an “anti-choice” women organization “bolster[s] those who harm us.” Or Jaclyn Friedman, of The Guardian and Time, who wrote, “anti-abortion = anti-woman.” Or Broadly editor Lauren Oyler who tweeted, "You're not a feminist (or at all smart) if you don't support safe and legal access to abortion." Or Bustle, which published the piece, “Why You Can't Be Pro-Life & A Feminist.”

For the answer to Greer’s question, many of today’s feminists need only look in the mirror. Or, in Greer's case, look at those around her.

But instead, Greer accused Conway of “play[ing] to the crowd.”

“We have to recognize that Kellyanne Conway knows that she’s also in the wood— in the weeds. And she’s possibly on her way out,” Greer said. “So I—I  think she's just trying to have that last grasp of relevance in some capacity and possibly – and she's a smart woman – to set herself up for possibly the next – the next gig because I can't see this gig lasting very long.”

To continue the conversation, Melber played another clip of Conway where she, in his words, spoke about “whether women have a problem with women in power.”

The panelists had an answer for that too.

She again went back to Conway’s comment on feminism.

“No woman that I've ever known including myself is pro-abortion,” she said. “All we are is pro-women having choices.” (She obviously hasn’t yet read the Salon piece, “I Am Pro-Abortion, Not Just Pro-Choice: 10 Reasons Why We Must Support the Procedure and the Choice” by Valerie Tarico.)

“No one wakes up in the morning, any of you go ‘Hey, haha, let's get an abortion’?” Giles continued. “ It doesn't happen. And I hate hearing that. I really resent that.”

And on that note, let’s talk Lena Dunham wishing she had an abortion. After all, Ryan knows all about it.

But she didn’t mention it. Instead, Ryan responded, “That's one of the – the greatest hits of the right trying to disparage feminism.”

If only that were true. But while today’s feminists say they stand for all women, their actions tell a different story.