This doesn’t happen every day in Hollywood: an upcoming film is bringing its actors closer to God.

On Tuesday, actor Andrew Garfield (Amazing Spider-Man, Hacksaw Ridge) appeared on The Late Show to discuss his role in the upcoming Martin Scorsese film Silence. Garfield plays a Jesuit missionary who travels to 17th century Japan at a time of Christian persecution. While Garfield himself wasn’t raised in a particular faith, he trained for a year with Fr. James Martin, a Jesuit, for his new role – a role which drew him closer to God. 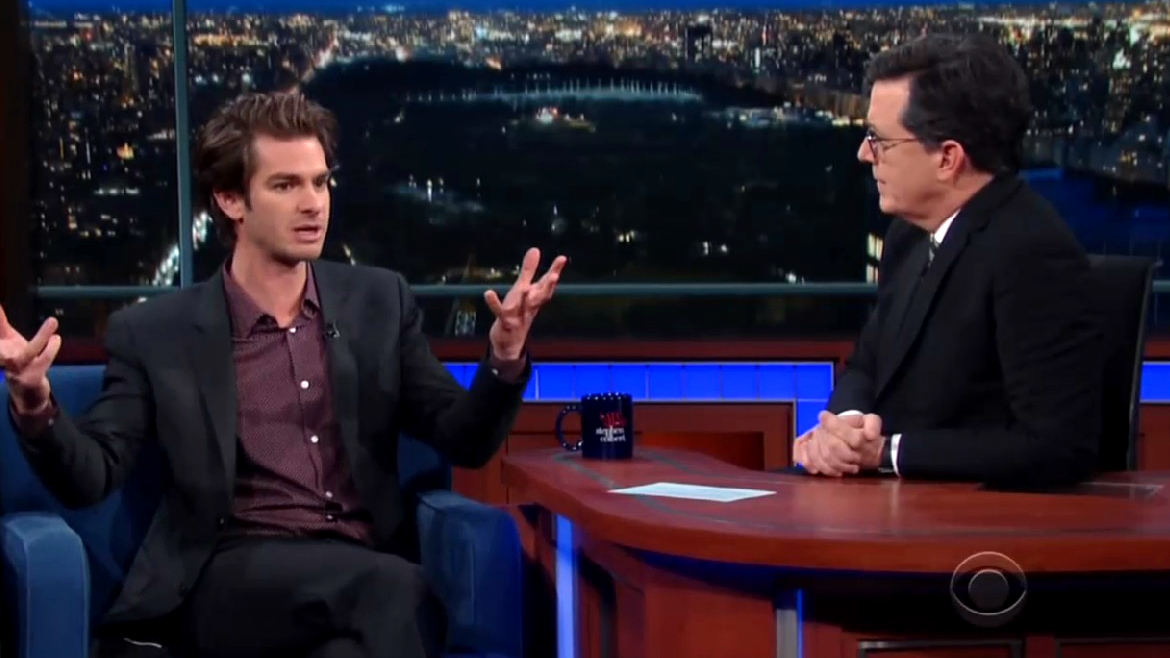 “Is it like becoming a Kung Fu monk, but with praying?” host Stephen Colbert joked. “What do you do to get ready for it?”

But Garfield took the question seriously.

“Not only do we study the theology and the history of the Society of Jesus [the actual name of the Jesuits Catholic order], but there's these – these processes called the spiritual exercises that St. Ignatius created when he founded the order,” he began.

He stressed the importance of the exercises, citing them as the “basis for all 12-step programs around the world,” including AA. “It's this transformational process where you do the imaginative, meditative prayers with the life of Jesus, where you place yourself in each [New Testament] scene, much like being an actor,” he added.

That connection to acting helped him foster a relationship with Jesus.

“I found out that Stanislavski who invented modern acting … was deeply inspired by St. Ignatius' spiritual exercises,” he continued, “so I felt kind of right at home, and it was this very weird thing where you create a very deep relationship with Jesus Christ.”

Not having studied Jesus or the Bible as an “agnostic pantheist,” Garfield identified with the Jesuits in his role preparation. “I also discovered the – the Jesuits themselves are incredibly pantheist in a way,” he said.

Colbert asked him to explain: “What do you mean ‘pantheist’? Like pagans?”

Immediately backtracking, Garfield responded, “No, I would never – oh please, do not – don't get me in trouble with Fr. Martin.” He continued:

“Has anyone fasted?” he asked. “It's a beautiful spiritual process, because you – the idea is you empty out in order for the spirit to enter. And, my goodness, I was empty, and it was – it was brutal.”

“After a week, when you haven't been able to talk and you haven't really met before, what's the first thing you said to each other after a week of silence?” he wanted to know.

According to Garfield, there were both pros and cons to the silence.

“It was so full of this kind of, you know, divine attempt to pray and to meditate and to get close to those deep inner voices and the spiritual kind of exploration we were doing,” he explained. “And I think we got into the car, and it was as if the devil in both of us said ‘where the [bleep] have you been?’ Because we just had the most disgusting, dirty, awful, dark conversation for three hours on the way to the airport.”

But Garfield didn’t fully identify with Catholicism. Colbert pointed to Mel Gibson who “believes the devil and the angels are real and they’re around us and fighting over us.”

“Do you believe in any of that stuff now?” he added.

“What do you mean ‘certainty’ is terrifying?” Colbert challenged. “If you knew there was an afterlife, would that be comforting or terrifying?”

When Garfield asked, “How would I ever know?” Colbert suggested, “A visitation from an angel.”

“Well sure, but I would always question it,” Garfield said. He continued:

Even after a visitation, I would – I think it’s healthy. You think about Thomas Merton, the great Trappist monk and – and philosopher, really. His – his doubt was his greatest ally. He was always constantly doubting. And I think a life of faith is not a life of certainty. A life of faith is a life of – of doubt. And I think it is so healthy to doubt. It’s so health to doubt oneself, it’s so healthy to doubt any assumption we make about how to live. And I think – what I say when – what I mean when I say certainty scares me, certainty starts war. Certainty starts war on behalf of ideology. Certainty of the ‘I – I know and you don't.’ That's the scariest thing to me and what – what a human being is capable of doing.

Although less in-depth, Garfield also appeared on Good Morning America Wednesday to discuss his role. In December, Garfield revealed that his training left him “filled up with all this information and all this longing to spread the teachings of Christ, which I truly started to adore."