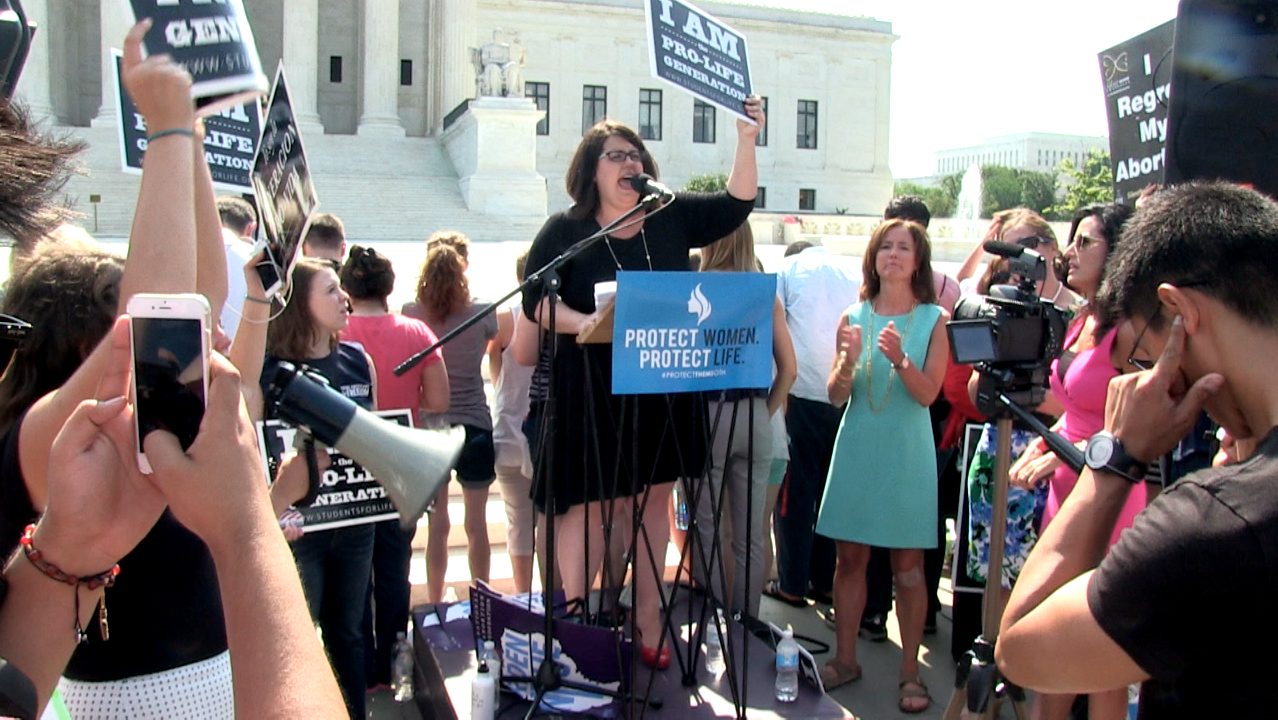 It’s an odd thing to see: Pro-life women speaking out in favor of safety standards for abortion. Pro-life women. Not pro-abortion women.

Following Monday’s ruling in Whole Woman's Health v. Hellerstedt, pro-life leaders slammed the Supreme Court decision in the Texas abortion case that left them “heartbroken” and “disappointed.” MRC Culture spoke with three women leaders who called out the justices for failing to protect women and criticized the media for siding with abortion supporters: Kristan Hawkins of Students for Life, Arina Grossu of Family Research Council and Penny Nance of Concerned Women for America.

Hawkins, president of Students for Life of America, described the justices’ decision as a “huge disappointment” and “travesty.”

“The Supreme Court put the so-called right to abortion in front of safety for abortion and told the states that they no longer can protect half of their citizens,” she told MRC Culture.

The Texas abortion case challenged HB 2, which required abortionists to have admitting privileges at nearby hospitals and mandated that those clinics adhere to the same standards as ambulatory surgical centers. The safety regulations would force many abortion clinics to close.

“This isn’t about pro-life versus pro-choice,” she said, but about “protecting women.” And, according to Hawkins, the majority of Americans agreed with “these common sense laws.”

But abortion supporters, she stressed, focus instead on the “dollar signs.” Video below.

“They know any regulation, any way to keep women safe, is going to cost them more money,” she added. (Never mind Planned Parenthood received more than $550 million in taxpayer funding in the 2014-2015 fiscal year.)

“They’re going to cover all these people,” Hawkins said of the media, pointing to NARAL and Planned Parenthood supporters. “I mean, it’ll be the usual thing, we won’t get any coverage.”

(And, as MRC noted Monday night, the broadcast networks revelled in the “despair from anti-abortion forces” after the SCOTUS ruling.)

“I’m extremely disappointed that five unelected, unaccounted-for justices made this decision,” she told MRC Culture. “This is about protecting women’s safety in these abortion facilities. Women are being hurt. They’re dying in these facilities.” Video below.

She also doubted that the media would cover the ruling appropriately.

“I think they’re going to see it as that that’s in the best interests of women,” Grossu warned. “But no, we are the ones that care about women. We are the ones who are looking out for their health and safety.”

As for Nance, president of Concerned Women for America, the court’s decision left her “heartbroken.”

Nance criticized the Supreme Court for siding with “big abortion” instead of women.

“We’ve had incidents of which women have been severely harmed and died because either they weren’t getting the medical care they needed following a botched abortion or they couldn’t even get to them because the size of the doors,” she said. (Although the media do their best to hide that.)

“We saw in Gosnell, in the Gosnell case,” she added, “what happens when that is not done.” Immediately after the decision was announced, the pro-life activists outside repeatedly chanted “Gosnell.”

Among other things, Philadelphia abortionist Kermit Gosnell was found guilty of involuntary manslaughter in 2013 after one of his patients, 41-year-old Karnamaya Mongar, died from drug overdose while undergoing an abortion. According to the grand jury report, paramedics spent more than 20 minutes searching for a way to get her out of Gosnell’s clinic because they ran into “cluttered hallways” and a “padlocked emergency door.” Video below.

“[T]his is such a loss not only for unborn children but also for their mothers,” Nance told MRC Culture, and, as a result, “This should serve as a rallying cry for every pro-life American.”

A rallying cry to vote, she explained.

“The next president will appoint between one and four Supreme Court justices, hundreds of lower court justices and about 5,000 leaders in government,” she urged. “We must vote.”

And Americans can’t count on the media to hold the court accountable either, she said.

“The media’s in bed with Planned Parenthood,” she said. “They’re part of the left-wing establishment and this is going to be cast as an issue of accessibility. But it’s not. It’s an issue of safety.”

The media also won’t likely reveal how crude and crass the other side while protesting outside the Supreme Court steps – although there are pictures to prove it.