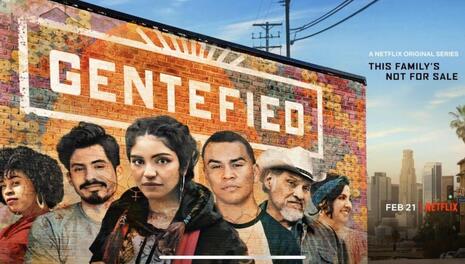 The first episode delivers the trope that “eleven million live in the shadows” yet the main storyline is about the Morales family patriarch who illegally entered the United States over thirty years ago as a young man and became a small business owner. He’s an illegal alien who is only now facing the legal consequences for his actions.

Casimiro “Pop” Morales (Joaquin Cosio) certainly doesn’t live in the shadows. His small restaurant was successful enough for him to raise a family and own a home. Season two begins with Pop’s release from jail after serving three months for a DUI, where it was discovered that he is illegally in the U.S. Now he is facing deportation, in addition to losing the restaurant due to the landlord selling the building. Pop discovers he is a local celebrity upon returning home from jail and a family friend gets local television coverage of his story.

Along the way, granddaughter Ana (Karrie Martin), a budding artist who is a political activist, lands a job with Nike to do the artwork for a new million-dollar campaign. In Episode 7, titled “No More Band-Aids”, she is supposed to spotlight “brown lesbian women” like her but decides to use her time at Nike to highlight Pop’s case. She draws a picture of Pop with the slogan “No papers. No fear. Just Nike.” prominently featured. So, instead of providing a positive message for the LGBTQIA community, as she was hired to do, she goes with Pops’ story:

Ana: This image will exemplify an issue affecting many Latinos around the country. This is Nike, right? So "just do it" and stand in solidarity with Justice. Stand with... "Casimiro Morales. The American dream." "No papers, no fear, just Nike." So what do you think? It's great, right? I mean, I think this is my best work.

Bree: Yeah. Is it too early for tequila? You know, maybe... maybe rum is a better alternative.

Ana: Come on. What is it? I mean, why are you day-drinking?

Bree: Ana. It's way too political.

Ana: You wanted my voice, this is it.

Bree: Is it? Ana, you are a queer chicana. That is your voice.

Bree: Ana, this isn't a platform for protest. This is a million-dollar campaign.

Ana: What about Colin Kaepernick?

Bree: This isn't Kaepernick. This... This is celebrating Brown lesbian women. This is a win for the LGBTQIA community.

Ana: Bree, I am a Brown lesbian woman, and this is the win I need! You of all people should understand that.

Ana: Well, I was taught to never compromise, and I have... had people who cared about me and reminded me of that.

Bree: What people? Your ex who told you to stop putting your family first? You got to get out of your own way. It's called being a professional. You take the money and you do the job.

At first, Ana is told that her ad pitch is too political and then, in the end, it is used because Nike, a company that loves social justice activism, decides they really like Ana’s ad. Ana, when her boss first rejected the idea as too political, referenced Colin Kaepernick’s deal with Nike. Ana was told she has to play by the rules until she doesn’t.

The ad campaign features billboards in major cities, including Los Angeles (where the family lives) and Times Square in New York. The public interest in Pop takes off and his lawyer gets CNN’s Van Jones to do an interview with him on "VNN." It is during this interview that Pop says that he’s not afraid anymore, he’s tired. He says illegal aliens are treated like animals and that is when he says, “Even dogs are treated better than an undocumented.” Please. Spare us the hyperbole. He defiantly says, “This is my home. This is where I belong, whether you like it or not.”

Van: Immigrants are truly the life blood of this country, and my next guest exemplifies it so much. He is a family man. He's just a pillar of his community, and yet he is faced with deportation. I want you to meet Mr. Casimiro Morales. Mr. Morales, welcome to the show. Listen, as an undocumented person, what is it that you want people to know about your story?

Van: Uh... are you okay, sir? I know this is live TV. You can get intimidated. Take your time.

Pop: Uh-uh. (In Spanish: No, I'm not scared. The fear is gone.) I'm not afraid. I'm tired. I'm tired of sharing all the good things I have done in this country, to make you feel bad for me? ¿Pa' qué? To convince you? That I am... a person? Look at me. I am a person. I have done good things. I have done bad things like everyone. (In Spanish: And what? You want to... Because I don't have a piece of paper you want to destroy my family?) Why? Why would this country do that to millions of people? To be treated like animals. (In Spanish: Not even that. Even dogs are treated better than an undocumented.) This country promised the American dream, but you lied. I work hard. (In Spanish: But you want to rip the dream from me.) I'm done begging. I'm... I'm not a perfect immigrant. But I know I am not a criminal. (In Spanish: Stop lying.) This is my home. This is where I belong, whether you like it or not.

In the final episode, Episode 8, titled “No Human is Illegal”, Pop has his day in court. His application to remain in the country while he applies for a green card has not completed processing so the judge is inclined to deport him. Pop’s lawyer describes him as tough – “He has huevitos with a side of Fox News while wearing a MAGA hat.” There is concern that the big ad campaign will backfire with the judge and that is confirmed when the judge begins talking about Mexican food and the restaurant with Pop. He references it when he says, “Good thing you have your ad in Times Square to pick up the slack.”

In the end, Pop receives an approval for his application to stay as he applies for a green card. Despite the attempts to paint illegal aliens as innocent victims and the people who expect others to enter the U.S. legally as white supremacists, it all works out for Pop and his family. They are, in fact, living the American Dream. Pop was never living in the shadows.