BLM Propagandized ‘Grey’s Anatomy’ Bemoans ‘Why Isn't Anything Getting Better?’ 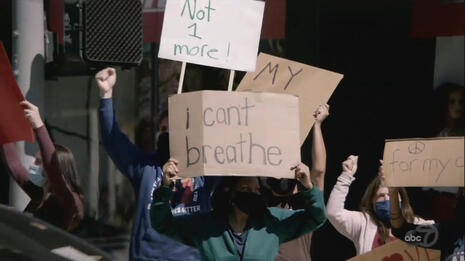 On the show, George Floyd has just died and the residents of Seattle protest. Dr. Jackson Avery (Jesse Williams) sees some protesters with “I can’t breathe” signs on a street corner as he is out on a run.

By the time he gets to Grey-Sloan Memorial Hospital, the other doctors are reacting to the viral video. Dr. Richard Webber (James Pickens, Jr.) gives the staff permission to take time away from work, if necessary, to process the trauma. That seems odd, given the hospital is at its limit due to the pandemic but staff is given time off due to the death of a black man in Minneapolis.

Throughout the show, there are incidents to remind us of racial injustice. White Dr. Cormac Hayes (Richard Flood) is the father of two black boys and they go to the protest. Hayes is clubbed on his head when he steps between a cop and his son who Hays said the cop was about to use his billy club on. Hayes receives stitches for the head wound.

Soon after Hayes is attended to, an older black woman is brought in with a tear gas canister impaled in her shoulder. Dr. Webber was near her at the protest. Nell (Phylicia Rashad) is a longtime protester who later regales Jackson, Richard, and Cormac with stories from past protests, dating back to the March on Washington in 1963. Her mother took her to that as a young girl. She and Richard compare scars from protests (click "expand"):

Jackson: The surgery went well. I was able to remove the canister to get your wound cleaned out quite nicely. No vascular damage. We'll want to go back in in a few days just to get everything nice and closed up.

Richard:  Yeah, a centimeter in the other direction and it could have been much worse.

Jackson: Eventually, you're gonna, uh, need some physical therapy just to help get your full range of motion back.

Hayes: Sorry to interrupt. Just wanted to check how the toughest patient in the hospital is doing.

Richard: Well, you found her.

Hayes:  Takes a gas canister at full velocity and still cracking jokes in the er. Mm-hmm. Never seen the like of it. How you feeling?

Jackson: Well, we did our best. You might have a little bit of scarring.

Nell: Oh, I'm not worried about a scar. Just go with the rest of them. Ferguson -- I tore my ACL running from a tank. Standing Rock, well, frostbite. And these are just the two most recent ones.

Richard: I think I got that beat. WTO protests, 1999. They fired tear gas into the crowd, a few of us ducked into a building, but they pushed the door closed before I could get inside. I shattered my clavicle and tore off some skin.

Nell: Hmm. When was your first?

Nell: The March on Washington. My mother took me. I was 11.

Hayes: You were there?

Nell: In person? I was. It was August, and hot. To be honest, I remember Mom taking me to cool my feet in the Reflecting Pool more than anything. But I do remember him on that stage -- the sound of his voice sweeping over us. The power of it. The holiness. It felt like... Possibility. Like, if, this can happen, anything can happen. Possibility like that was rare. And it's worth a few scars.

After the stories from Nell and then Richard telling Jackson about the powerful feelings from ‘peaceful’ protests, Jackson realizes he is missing out on the action. He confronts his mother, who owns Grey-Sloan, Dr. Catherine Avery (Debbie Allen), about why they don’t “have scars” from protests.

She quickly schools him about fighting battles and the progress that has been made over the last decades (click "expand"):

Catherine: Oh, hey. Richard tells me your new patient Nell is quite the storyteller. I'm thinking about going down there to meet her before she gets discharged.

Jackson:  Why don't we have scars, Mom?

Jackson: My whole life, whenever I see people marching in the streets, I hear your voice telling me that just going to work is heroic enough, that we need to fix things from the inside. Succeed first, then give. Like, that's what -- that's what you taught me, right? And -- And here I am. I'm -- I'm successful, I've given, and nothing seems to change.

Catherine:  I know what it's like to get discouraged, Jackson.

Jackson:  No, I don't -- I don't need a pep talk. That's not what this is. I -- If our foundation is so good at fighting the good fight, then why isn't anything getting better? And don't take that the wrong way, alright? I'm just saying, maybe both of us have got this wrong. I mean, look at what is happening in the streets right now. Why aren't we there? Why the hell don't we have scars?

Catherine: Let's just drop the "We" business of this right now, okay? You may not have scars, Jackson, but I have decades' worth. And if you think nothing has changed, why don't you just ask yourself how many Webbers, Baileys, or Pierces you would have seen walking through these halls 40 years ago -- 20 years ago. You have no idea the battles that I have fought and won for that. And if you don't see any scars, it's because I'm damn good at this job.

Jackson:  Of course you are. I'm not...criticizing you. You're incredible. But I'm saying, aren't you also annoyed with all this red tape? Having to convince some trustees when you have a brilliant idea? Like, what about our ideas? What about doing something about the Black maternal mortality rate instead of talking about it? What about building our database for the obvious racial bias in medical training? What about building our -- our medical school that we talked about? So many things we could be doing.

Catherine: One battle at a time, Jackson. That's how the world works.

Jackson:  Nah. It shouldn't be that way -- not anymore, alright? I don't want to play a role in a system that's just broken.

Catherine: You've already said it, Jackson. Don't try to lie about it now.

The episode also included a scene where Dr. Maggie Pierce’s (Kelly McCreary) fiancé is en route from Boston to Seattle and is pulled over by two white sheriff deputies. His car was loaded up with all his stuff as he is moving to Seattle. They stopped him because his bike rack obscured his license plate. They made him get out of the car and they had a police dog with them.

Afterward, he calls Maggie and tells her about how the deputies threw all his stuff out of the car, conducting a search for drugs. He’s shaken up by the experience but manages to make it to Seattle and Maggie by the end of the show.

The show was determined to paint BLM protests in a sympathetic way and America as a racist, ugly country. Catherine Avery is right, though. There has been tremendous progress with racial equality since the days of Martin Luther King, Jr. To continue to label everything as racist doesn’t move any discussions forward.

Conservatives, let's fight back! This show was sponsored in part by McDonald's, T-Mobile, and Old Navy.