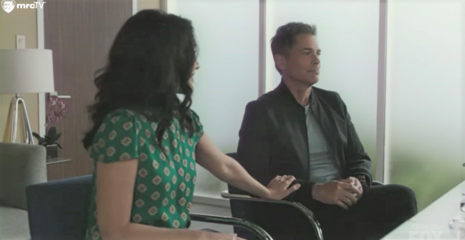 An unplanned pregnancy catches Austin Fire Department Captain Owen Strand and his ex-wife, Gwyneth, by surprise. In the February 15 episode of Fox’s 9-1-1: Lone Star, titled "Difficult Conversations", the couple wrestles with the decision of whether or not to have the baby.

Gwyneth (Lisa Edelstein) and Owen (Rob Lowe) make an appointment with an OB-GYN and he confirms that Gwyneth is four weeks pregnant. Labeled a geriatric pregnancy (Gwyn is well over 40), the doctor advises the couple of the possible complications and risks posed to both Gwyn and the baby due to her age. When Owen asks the doctor what most couples do in this situation, Gwyn chimes in that they usually terminate the pregnancy. The doctor takes a pass on offering his advice on that. “That’s really a conversation for the two of you,” he says. Maybe in Texas that would be a doctor's response, but the couple would be facing pressure to abortion in other liberal areas.

Owen: Never tell me the odds!

Gwyneth: Han Solo. It's a--it's a thing he does. -So I guess it's not menopause.

Dr. Evans: Nope. Looks like somebody got in just under the wire.
Gwyneth: How about that? And how far along?

Dr. Evans: Based on your hcg levels, I'd say about four weeks, but the ultrasound will narrow the window. I take it this wasn't something you planned.

Gwyneth: No. This was a-- a total, complete accident.

Owen: Uh, well, it's not like we crashed. There were a couple of collisions, you know? I mean, there were multiple accidents that could've—

Dr. Evans: Well, there's no easy way to say this next part. While geriatric pregnancies are not uncommon, they're rare. There's a piece of paper in this folder that has a lot of scary numbers on it.

Owen: You have? You've Googled? I have not yet Googled.

Gwyneth:  The risks are heightened.

Dr. Evans: And not just for the baby. There are serious complications that could arise for you as well. Increased risk of heart conditions, blood clots, preeclampsia, even maternal mortality. And I'm sure you've read that a significant percentage of these pregnancies end in stillbirth or miscarriage.

Owen:  Well, that's bleak. So what do couples in our situation normally do?

Owen: Is that what you're recommending?

Dr. Evans: I'm not recommending anything. It's really a conversation for the two of you.

As Owen looks at old pictures of their now grown son, T.K., he and Gwyneth discuss what is probably the “logical choice” for them. The logical thing. For pro-abortion activists, unborn babies are disposable, especially in tough times, and they've succeeded in convincing people that killing their children is the rational, expected thing to do.

Owen: Can you imagine doing this all over again?

Owen:  Chasing a toddler around. First day of school.

Gwyneth: Hiding little notes in their lunch box for them to find so they know they're loved.

Owen: You did that for him too?
Gwyneth: Are we actually considering this?

Owen: Look, we're young for our age, you know? We do all the healthy things.

Gwyneth: Well, it'll be a skill that comes in handy when one of us breaks a hip moving them into a dorm and they have to rush us to an er.
Owen: Yeah, I had a case today. It was terrible.Dad. I couldn't save him.

Owen: And his daughter was maybe 19, and now she's left without a parent.

Owen: So would it be fair to do that to our kid?

Gwyneth: Well, that's assuming the pregnancy goes well, which is—

Owen: a huge assumption. I mean, the risks—

Owen: Not just for the baby. For you. Maybe we should just do the logical thing.

Fortunately, on the day of the abortion appointment, they confess to each other that they really do want this baby and decide to go forward without the abortion.

Owen: What time's the appointment?

Gwyneth: Yes. So should we go?

Owen: Yeah. We should go. Have you eaten? Do you want something to eat?

Gwyneth: I'm not supposed to eat before.

Owen: Right, right, so we can-- we can get something after.

Gwyneth: If you want.

Owen: Oh, this place will disabuse you of that misapprehension. All right, Mexican. You can have a margarita. Which is how this whole thing started.

Owen: Well, what do you want?!

Gwyneth: I wanna have this baby!

Gwyneth: Are you sure?

Owen: I think so.

Gwyneth: It's probably a terrible mistake.

Gwyneth: So, are we doing this?

Owen: I think that's what we've been saying.

And, just like that, a happy ending. Washington Post columnist Kate Cohen, who complained based on outdated information that there aren’t enough abortions on TV, will be so upset when she finds out about this in a few years.