'One Day at a Time' Reboot: Throw Out 'That Bobo in the White House' in November 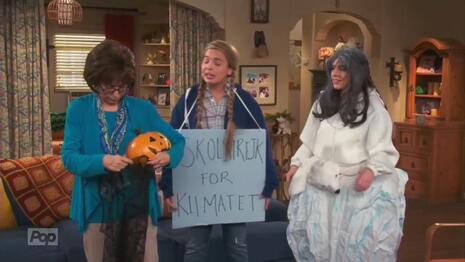 Editor's Note: The One Day at a Time episode "One Halloween at a Time" originally aired on the POP network on April 14, 2020, but was broadcast on CBS for the first time on October 19, 2020. The following is a review of the episode as the article originally ran in April.

The One Day at a Time reboot now airing on POP has been less obnoxious than its previous seasons on Netflix. The April 14 episode, however, took a turn toward past seasons by spouting unoriginal liberal talking points.

Randomly, the latest episode is a Halloween-themed one. In “One Halloween at a Time”, teenager Elena (Isabella Gomez) and her girlfriend Syd (Sheridan Pierce) dress up as Swedish teen Greta Thunberg, an international climate change activist, and a melting iceberg. Explaining the reason for their costumes, Elena tells her grandmother, Lydia (Rita Moreno), that they really aren’t trick or treating. The two politically active high school girls are “going door to door to collect signatures and inform people about man-made climate change.”

As the girls start to head out, Lydia asks Elena to put a decorated pumpkin outside. Elena protests by saying the orange face is more than she can stand to look at because of the “Bobo” in the White House. Those Orange Man slams never get old, do they?

Lydia: Oh, good! You are going out for Halloween.
Elena: Mm-hmm. I'm climate change activist Greta Thunberg, and Syd is a melting iceberg because you're too hot.
Syd: Oh!
Elena: We're Thunberg and iceberg!
Lydia: Why can't you just be cats? You're already got the whiskers.
Elena: Well, we are not going trick-or-treating. We are going door to door to collect signatures and inform people about man-made climate change.
Syd: Oh, shouldn't we say person-made climate change?
Elena: I'm good with men taking the credit for this one.
Syd: Halloween is the perfect night because suckers will open the door for anybody.
Elena: Oh, yeah. You ring the doorbell, and before they even know what's happening, we hit them with the facts.
Syd: Bam! Damage will be irreversible by 2030.
Elena: Bam! Welcome to the insect apocalypse.
Lydia: Bam! That is the sound of a door slamming in your face. Put this outside.
Elena: Ugh, with that Bobo in the White House, I can't stand to look at an orange face right now.
Lydia: He's like a pumpkin. He will get thrown out in November.

Naturally, Lydia is correct about the girls’ costumes. The neighbors that they go to for trick or treating don’t recognize the costumes. They're mistaken for Anna and Olaf from Frozen, and Dorothy and the tornado from The Wizard of Oz. In the end, though, they realize that Halloween is fun because they receive so much candy.

Elena says to Lydia, “Who knew Halloween is so much fun?” Lydia answers as anyone would – “Literally everybody.”

I would like to think that this show’s anti-Trump, social justice warrior remarks will be the last but that is highly unlikely. Maybe the girls can learn that normal life can be fun, though. Not all traditions have to be the target of a protest.