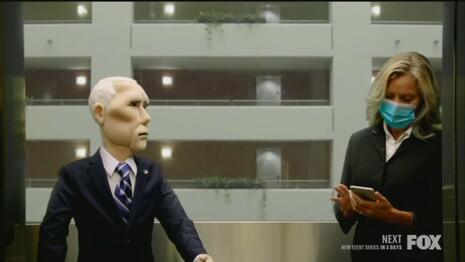 Puppet President Trump was mocked for his debate performance and his answer about the Proud Boys, with real Larry King offering up some advice for the next debate. He tells Trump to be "more positive."

Puppet Joe Biden is shown doing debate prep with puppet Nancy Pelosi and puppet Rachel Maddow, with a rabid badger standing in for President Trump in rehearsal. One funny moment happened when puppet Biden’s fallen asleep at the podium and puppet Kamala Harris rushes over and asks, “Is he dead? 'Cause I’m ready!”

One notable scene was of puppet Vice President Pence who boards an elevator and discovers he is alone with a woman. He freaks out and calls his wife to “confess” his situation. She is furious with him and retaliates. After the woman exits the elevator, a cleaning woman boards the elevator so Pence is still stuck with a strange woman. Finally, she leaves and is replaced with a scantily dressed cast member from RuPaul’s Drag Race.

Aide: Mr. Vice President, won't you consider wearing a mask indoors or at least in the elevator?
VP Pence:  The president's not afraid, and neither am I. We can't let our silly little fears get the best of us.
Aide: Yes, sir.
VP Pence: Wait! Come back! I'm alone with a...woman. Relax, Mike. It's gonna be fine. It's one quick elevator ride.
Woman: Good afternoon, Mr. Vice President.
VP Pence: I love my wife!  Dear Lord, this has gone far enough. I have to tell her.
Karen Pence: Hello?
VP Pence: Karen, I've dishonored you! I'm in an elevator with another woman! Please forgive me!
Karen: How could you, Mike? Thou shalt reap what thou soweth! Feldman! Yes, you! Come in here now!
VP Pence:  Karen, what's happening?
Karen:  He's watching me brush my hair!
VP Pence: No!
Karen: Too late, Mike! Now we're holding opposite ends of the doorknob at the same time!
VP Pence:  Mother, I'm begging you, I'll never do this again. I'll have every elevator thoroughly vetted. I left her no choice. Oh, Jesus, why are you testing me?
Cleaning woman:  I think it's stuck!
Karen:  Mike, I've decided to forgive you. Just come up.
VP Pence: I can't. We're stuck.
Karen: "We're"? "We're"?!
VP Pence: Yes.
Karen: Feldman, get back in here! And bring those maintenance men with you!
VP Pence: No! Oh, I've got to get out. Oh! I've got to get out! Got to get out of here! Oh, hallelujah. Oh. Come on. Oh... Aren't you...?
Drag Queen: Yes, I'm Widow Von'Du from "Rupaul's Drag Race."
VP Pence:  Can't take the risk.

This skit shows Hollywood’s willingness to mock a Christian’s religious beliefs and practices. In this case, Mike Pence’s marriage is dinged for entertainment.

It’s worth noting that both parties were mocked in this show but more the Republicans. Biden was treated more gently, although his remark that if you don’t vote for me, "you ain’t black" was turned into a game show.

Trump grouses that Biden isn’t qualified to be president, even though he was vice president. The president talks down the job of vice president by bringing Mike Pence into the conversation. “All the VP does is stand there, nodding nervously while the president watches TV and tweets. It's a moron's job. Vice presidents are nothing but spineless, homophobic religious nuts who weep uncontrollably every time I show them a picture of my ex-wife's boobs.” Ugh.

Outside the Extra bus, Trump begs to come inside to recreate a conversation like a past one he had with Billy Bush that was exposed in the 2016 campaign, after calling the real Stormy Daniels and offering to pay her hush money "like I did in 2016." Billy isn’t interested but Trump is so determined to "recapture the magic of 2016," he offers up the “peepee tape” and in doing so throws Senator Rand Paul under the bus. “Wait! I love your show! I could help you! I have the peepee tape. I didn't want to do this, but you're a tough negotiator. All I ask is that you blur out the person doing the peeing. It would kill Rand Paul's family to see him like that.”

In 2020, this show passes as primetime network entertainment – a political puppet show for adults. Let’s hope that the networks get a little more clever as the new season of shows begins to come back.

Conservatives fight back: This show brought to you in part by Xfinity, Febreze, and Swiffer.